Not just another MP3 player but this touchscreen controlled unit is also an MP4 unit as well. This means that not only can you listen to your music you can also watch movies. 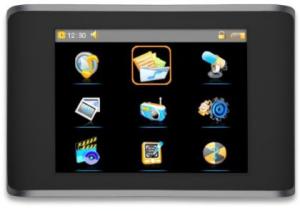 It is 7.5x5x1cm and weights only 50grams. Mine was pink but they do other colours (Black, Blue and Green). The 5x3.7cm screen is called by the diagonal measurement 2.4inch screen displays QVGA (320x240). It has a solid rechargeable battery that should last 8 hours between charges playing MP3 and 4 hours playing movies.

The top has on/off hold slider and two buttons to increase and decrease the volume. The bottom is where the special USB lead is inserted (this charges the unit as well as transferring material), micro SD card slot to provide additional memory (up to 16GB as it supports SDHC) and a 2.5mm earbud socket (earbuds supplied) but if like me you prefer your own do not worry as a 2.5 to 3.5mm lead is provided so you can use any normal earbuds/headset. There is also a very small stylus inserted vertically down the side of the unit, while this works well I found that the screen also responds to finger prods.

Documentation is not supplied but you can download the user manual from the website. I think this may be preferable to the multi language user guide where one line in ten is in the language you want.

I managed to install some MP3 and play them without any problems but downloaded the manual to find out how to install movies. This then says movies need to be in ‘.mtv’ format but no mention of how to convert. I then return to the box it came in and found a mini CD marked ‘Driver Disc’ this normally is only a driver for Windows 98 but I checked it and found not only is it this but it has other folders (including manuals) and also a utility to convert movies to the correct format. I gave it a .mov file and this it converted without problem. It is stated to handle .avi, .wmv, .mpg, .mov, .vob, .rm and .3gp the last named is mentioned as MP4 but it would not look at my.mp4 files.

You can use the video converter (v2.9) to select a portion of a video to convert. I tested a number of .avi and .mov and to give a vague idea a 7minute 30second clip took around 24 minutes to convert. The original size was 591MB and the converted size to play on the Dane-Elec player was 140MB. I found that by default the converter and files remained on the CD but it does create a folder on your hard disc for the converted files. It will only do a single file in a session so you need to close it and reopen it to convert another file.

To switch on hold the on/off button fully over for around three seconds then the front screen appears while the eight icons are loaded, they appear in three rows. Music, File, Voice. Photo, Setup, Video. Ebook and Games.

The manual makes mention of an FM Radio but I assume that is a different model. The folder structure has four folders audio goes in one and your photos and videos go into the Playlist folder.  Any .wav files you record (voice) go into a third. I found the voice files in .wav format took around 240kb a minute.

There are two folders created in My Computer, one for the 2GB of internal memory and one for whatever the size of the Micro SD card you might insert in the unit (up to 16GB).

I queried the fact that .MP4 files could not be handled and was sent a link to a download that gives a rather swishier front end that finds all video on your hard disk and then offers you the ability to select files change them to the .mtv format when transferring them to the folder on the device, this application can handle .MP4 files. In fact using the icons at the top of the screen it can search for music and photo files in the same way. You will need to manually move these files from Video to Playlist as otherwise they cannot be seen, I have reported this error.

Doing my Internet searches found the Dane-Elec Music Touch (2GB) at a best price of £36.99 including delivery from the first link below. That is in fact a 4GB version I cannot find anyone selling the 2GB version I was sent. They also seem to have the other three colours as well as unless you are a lady the pink one may be not exactly to your liking.

Could you possibly pass on the web address for the different video converter software?