This is a total touchscreen MP3 player that can also play video and much more. The only physical controls are on the top the on/off hold and on the side the tiny record button. 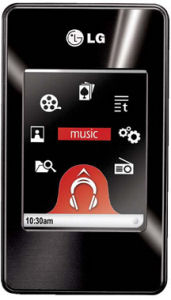 It is 10x5x1cm and finished in a matt metal effect with chromed sides. The total weight is only 65grams it will sit comfortably in your palm. The hold (lock) part of the unit is very important as when it is in your pocket the slightest touch on the screen is likely to change tracks.

The screen is 5x3.6cm and it can display video quite well. The base has a bung to cover the mini USB connector that enables transfer of items to and from the PC and also to charge the unit. Beside this is a 3.5mm earbud socket.

So now to try and cover everything this does apart from playing music it also plays video and is an FM radio. Just for good measure it can be used as a voice recorder.

The screen controls take a while to get used to but once you have mastered the requirements all work fine, just remember to slide the hold (lock) slider on the top before placing in the pocket.

My unit had been elsewhere before it arrived with me and whoever had it previously managed to get it in a state where you could view all the music but play nothing. After using the radio without problem and also watching the stored video I decided that the pop music diet of the previous reviewer was not for me (even if I managed to get it to play) I tried deleting some of the content and this proved to be impossible as it was all protected. I tried adding some of my own but this was not allowed either.

So the mallet approach was required with a reset, this worked but changed the language to Italian but I struggled my way to the settings folder (an image of cogs and a spanner seems universal) and got back to English. Now I could delete and then I was able to install music of my choice.

The software seemed fine but although it says it will install on Vista all I got was 'the application has stopped responding' under XP there was no problem. There are two modes the first only allows you to transfer/synchronise using the LG software the second allows the unit to be a drag and drop item in My Computer.

One nice feature is that if you choose to store items in different folders and pick the play all option the unit will quite happily swap between folders. It will also do so if you select the random mode. Should you wish to play content from a specific folder this is also possible using the menus within the unit.

The only way to bring video to the unit is through the LG software as it needs to be converted to the screen size and resolution within Windows to suit the LG unit.

The FM radio was okay but as with all FM signals it is rather directional. The recording mode worked fine with a press on the side button bringing up the correct screen and then a touch on the screen started the recording and it was replaced with the word pause press this to pause, to stop press the back arrow at the top of the screen I found it used roughly a megabyte of space per minute recording to 128mbps MP3.

I was sent the 4GB version but they also do a 2GB one. The stated battery life between charges is 20 hours for MP3 and 3 hours for video. My tests were more or less consistent with these figures.

Doing my Internet searches found the LG MFFM37 at a best price of £134 including free delivery from the first link below. The same company do the 2GB one for £90.