Special offer
£49.99 including delivery
from play.com 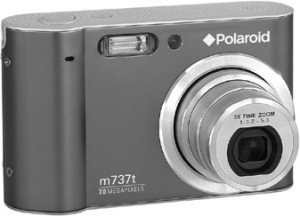 It is two tone grey with a silvered ring around the lens. A seven mega pixel offering a year ago would have been a really powerful offering. It has the standard 3x optical but they - unfortunately - still use the optical x digital to produce a figure of 12x something that most companies have been shamed out of doing. The only real use for digital zoom on a camera is to zoom into part of a taken image on the display. Anything else the digital zoom can be done better in software on the PC.

It is 9.5x6x2cm and weights just over 150grams. One recent feature is touchscreen and a lot of it's menu options are activated in this way. There are two buttons on the top of the camera the on/off and the shutter release. The right side has the anchor point for the wrist strap, the left side has nothing and the base the door that the solid battery sits behind beside the optional SD card, the only other items are the anchor screw for a tripod and a mini AV out socket.

The back is totally dominated by a huge 6x4.5cm TFT display - described as 3 inch - to the right of this are five touch buttons telephoto, wide, stored images, menu and scene.

First job on getting the camera from the box is to charge the battery in the cradle supplied (I am told that this is only available in Europe and that is probably why there is no 13amp plug in the box) I used a shaver adapter to charge it.

There are no less than 30 scene modes spread over five pages of six again one finger touch to select. However for the novice user then just leave it in Automatic and let the camera make the choices, of course it can take short movie sequences (found in scenes) and these are perfectly acceptable and another good reason for a decent sized SD card.

Another feature that is starting to become accepted are near normal is face tracking, this is when if you set an image on a face and it moves slightly (not several feet) then it tracks it to keep the focus perfect.

If I have a criticism of the camera - apart from my rants above at the industry in general - it's that the image in the display is often brighter than the captured image so when you print you may be disappointed. So my advice is adjust the screen display down a little, this of course is something that a viewfinder could negate but with TFT displays being huge there is no room for one.

This is the point where I sum up the unit and work out how good value it is but as I cannot find any UK sites selling it I cannot give a value score. This also reflects on the other categories as well as if it was £100 or £200 or maybe more what the camera does changes. I am told it is for sale in Ireland, Italy, Hungary, Czech Republic, Netherlands and parts of the Middle East. Doing a search found it at link below £99.

It's a decent camera for someone with little knowledge to take reasonable images the touch screen is getting more popular but then the TFT is vulnerable to finger marks. If anyone finds the Polaroid M737t for sale in a shop or on a site let me know please.

Thanks for the article. I'm gonna buy one off ebay for about 100 american dollars, and I've been looking for reviews on it, but have only found this and one more.
Rating:

Thanks Lizzyg, hope you enjoy the camera and that customs don't stick you for duty and VAT. Let us know how you get on with it.
Rating:

you asked for someone to let you know if they found this item on sale. i just purchase it for $69.99 plus 5 dollars shipping and handling. http://shopping.yahoo.com. HURRY UP it's only a 24 hour deal site so this item will be gone by ten o'clock tomorrow night, unless it sells out before then. good luck.
Rating:

So far so good....The big display is nice, but I think my flash is NOT working :(
Rating:

I just recieved this camera for a Christmas present along with a 2GB SD Card from my Fiance' and I like it a lot. Everything about it is pretty simple. The video feature is really cool I have taken 3 video's with it and they look great. I too don't think I will ever take the cover off of the LCD screen unless it falls off as I hated the fingerprints all over my last digital camera. I reccommend this camera and hope you all enjoy it as well!
Rating:

this my first digital camera and i love it , it is so easy to use i did not even crack the book it was simple. As for the screen i don't think that i will ever take the cover off, unless it falls off.
Rating:

The general rule is that you should always charge a battery before use, so if I remember this camera correctly you plug the battery into the charger, and when mains power is added the charger shows red when it changes to green the battery is charged.
Hope you enjoy the camera
Rating:

How long does the battery last and do you need to charge 1st?
Rating:

I recently purchased the digital camera for about $120 U.S dollars I agree with adjusting the screen, and that it's a fairly simple camera to control. I haven't removed the plastic film off of the screen because I don't want to bother with the fingerprints yet. I enjoy polaroid and happen to have a polaroid 60 watt lightbulb that has lasted in my lamp for one year. So I went with the brand, sue me. Overall the camera is reasonable in it's menu display, and i haven't messed with the video yet , but I believe this camera can save over 2 hours of video.

thanks for the article