A slightly chunky offering from GE, but the G100 has a decent CMOS sensor and it has the ability to shoot 10FPS at full resolution. It is 15x optical and takes a 14.4MP image which of course means it can also capture Full HD video. 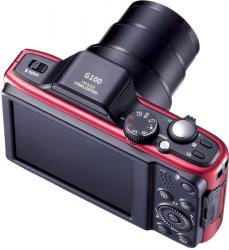 The GE G100 measures 10.5x7x3cm and weights 220grams. While it is available in black it is also sold in a flame red and as I reviewed it in white. This has a black back, top and black rubberised grip on the front as well as a silvered lens surround.

Looking at the unit from the rear the left side has strap anchor point, as does the right side as well as a rubberised bung to cover HDMI and USB ports. The base has a tripod screw and a door behind which is the solid battery and any SD card you might insert. The face is dominated by the 15x optical zoom lens that expands up to 5cm when fully zoomed. Just to its right is the light sensor and further right the rubberised finger grip.

The top has a slider switch to open the manual flash which is to its right and it is never closer than 6cm to the lens. To the right of this an eight position wheel and then a tiny silvered on/off button and then a larger shutter release that has the wide angle / zoom control around it. Finally two further black lozenge shaped buttons.

This leaves the back where the 6.2x4.7cm TFT display dominates and while the screen itself is shiny the black surround is matt so while the fingermarks are still there they do not show. To the right of the TFT a very busy area with a thumb grip and to the right of this a quick record button, below this a pair of well marked buttons and then the ubiquitous five position joystick and finally another pair of well marked buttons.

Turn the wheel to Scene mode and there are 25 to choose from as you toggle through them you get two large thumbnails below to show what the effect will give on the right and what no Scene mode will give you on the left. This is a great teaching tool if nothing else and it saves you coming home disappointed with what you captured. 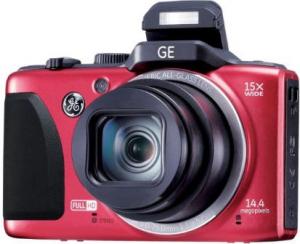 The 15x optical zoom should be used with care as however steady your grip I doubt that you will get a decent image unless you have a tripod or at least a solid object such a wall to hold it steady, there is image stabilization but it can’t work miracles.

I took images in low light and was pleased with them. Remember that flash in certain situations is frowned on. However images with flash were also good and while having to manually raise the flash may initially not give you the result you want it does make you think about composing the shot rather than just pointing and shooting.

While this is a digital camera and not a movie camera it can take rather good movies – as can most modern cameras – certainly a lot better than most mobile phones.