A last minute decision took me to a central London hotel for news of a new product that has already taken America by storm. 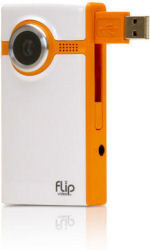 Flip is the name and flip is the action that reveals a concealed USB connector.  But just what is this product whose name is derived from a user-instigated action?  The Flip is a digital camcorder aimed at the mass consumer market and has been designed around the three core concepts of fun, simplicity and quality.

Available in a choice of white, black, orange or pink, the Flip provides out-of-the-box point and shoot capability.  Well not exactly out-of-the-box as you do have to insert the two supplied AA batteries that power the device but as near as makes little difference.  Featuring a 1.5-inch colour transflective (using a back light in conjunction with a reflective mirror) screen, the Flip keeps its controls down to a minimum.

A power on/off switch is located on the right side while a slide button on the left side releases the catch holding the USB connection from its recess so that it flips out.  The remaining controls are positioned beneath the screen.  These controls consist of a one-touch start/stop record button (red in colour) surrounded by a four-way navigation pad.  A couple of buttons to play and delete recordings are positioned on either side of the pad.

As this is purely meant as a fun video capturing device, although it is possible to grab individual frames as a photo from a clip, the Flip uses uncompressed VGA quality video captured at 30fps rather than cause confusion with a megapixel rating.  The video is stored as MPEG-4.  With the built-in 2GB of memory, the Flip should be capable of providing the user with one hour of recording time.

Capturing video by the simple point and click method is only half of the functionality offered by the Flip.  Built into the device is software, compatible with Windows (XP SP/2 and later) and Mac (OS X Tiger 10.4 and later), that allows the user to view and edit content; grab still images from a recording; and share content with others.  Amongst the claims of the supplied software are the capability to automatically create pleasing movies from selected clips and the ability to implement auto-formatting and upload content to MySpace and YouTube.

As well as the flip-out USB connector, the Flip has a connection socket for linking to a television for big screen playback.  The appropriate leads for connecting to a television are bundled in the box with the product.  Also included are a soft, draw-string carry pouch, wrist strap and a fold-out Quick Start Guide.  Various other optional accessories, such as a tripod and underwater case, will be available.  The Flip has been aggressively priced at £99.99 and should be available from several big name on-line and traditional stores.  We hope to have a full review of the product available in the near future.

You can see the full range on Amazon :