Having recently joined the Acer family, Packard Bell took the opportunity of Acers Global Press Conference 2008 to demonstrate its new product line up. These products included a netbook plus various notebooks and desktop systems with a selection of LCD monitors and storage devices. 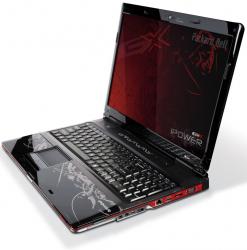 Whereas Acer has named its netbook the Aspire One, Packard Bell has opted for the “dot” designation.  Based on the Intel Atom processor with 1GB of RAM, the “dot” has an 8.9-inch display with a resolution of 1024 x 600; 5-in-1 card reader; three USB ports; built-in Wi-Fi (b/g); and a 160GB hard drive.  This netbook comes with Windows XP operating system and has a 6-cell battery as standard.

Described as a “sensual 12-inch limited edition notebook”, the EasyNote BG48 is encased in glossy white with chocolate coloured highlights.  This 12.1-inch model weighs 1.6kg and is based on the latest Intel Centrino 2 processor technology.  Other features include a 4-in-1 card reader, built-in Wi-Fi and Ethernet plus a 1.3 megapixel webcam.  Also in the BG series are the BG45 and BG46.  Similarly equipped to the BG48, these two models will be available in Pearl White or Jet Black.

Three 17-inch models were included in the new product announcements.  The EasyNote ST86 is easily recognised by its honeycomb pattern silver cover with a white interior.  This model has a storage capacity of 640GB and features an e-SATA port and an ATI Mobility Radeon HD3650 graphics card.  Optional extras include a digital tuner, Blu-ray drive and a 9-cell battery.

The EasyNote ST85 sports a moonstone colour scheme, which helps differentiate it from the ST86, while other specifications are similar.  Unlike the other two 17-inch models, the EasyNote SL81 is an AMD driven system powered by Turion X2 Ultra Dual Core Mobile Processors but otherwise has a similar feature set.

The 15.6-inch widescreen display of the EasyNote TN65 offers 16:9 aspect ratio for a better experience when watching movies.  This notebook comes with ATI Mobility Radeon HD3430 graphics, including ATI Avivo technology for HD content, and support for DirectX 10.1. 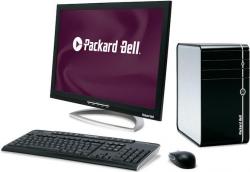 Offering the slightly smaller screen size of 15.4-inch are the Intel based EasyNote MT85 and the AMD EasyNote ML61 models.  The former features ATI Mobility Radeon HD3650 graphics while the latter comes with ATI Mobility Radeon HD3470 graphics.  Both models offer a Blu-ray drive as an optional extra.  Combining a Moonstone colour scheme with a metallic design is the 13.3-inch EasyNote RS65 while the EasyNote RS66 opts for a honeycomb pattern silver cover with a brushed aluminium palm rest.

Completing the new notebook announcements is the iPower GX.  This model is aimed at games and features a 17-inch HD display; Intel Core 2 Quad processor and the NVIDIA GeForce 9800M GTS with 1GB of dedicated GDDR3 VRAM.  However if you prefer a desktop machine for your gaming pleasure then Packard Bell can offer the ipower X2.0 system.  An Asetek liquid cooling system and three 120mm fans help deliver a powerful, silent performance from the Intel Core 2 Quad or Intel Core 2 Extreme processors along with NVIDIA GeForce 9800GX2 graphics.

If space is a consideration then you might like to consider the Packard Bell imax.  With an air-cooled chassis that is 60% smaller than a standard PC, this model is powered by an Intel Core 2 Quad processor with 4GB of memory.  Versions are available with a Blu-ray combo drive and a hard drive of up to 750GB capacity.  Also included are six USB 2.0 ports, Firewire connectivity and a 21-in-1 card reader.

With the claim of being optimised for ease of use, the Packard Bell ixtreme features a dual-tone black exterior with chrome accents and side panels.  Available with either the latest dual core or quad core processors from Intel and AMD, the ixtreme has eight USB 2.0 and two Firewire ports plus a hard disk of up to 2TB capacity.

Packard Bell also has a range of widescreen displays that include 19-inch and 22-inch models with up to 3000:1 dynamic contrast ratio and a 2ms response time.  Carbon, Grafite, Jumbo, Studio and Chroma are the names given to various external Packard Bell drives with capacities that range from 320GB up to 2TB.  With Acer’s multi-brand strategy, it looks as if we are in for an interesting time.