The Pentax K3 is a weighty and powerful 24M pixel DSLR unit. I was sent the body and a 18-135mm lens. It went on my various journeys for several weeks, so not only did I get my normal range of test shots but some interesting Landscape offerings. 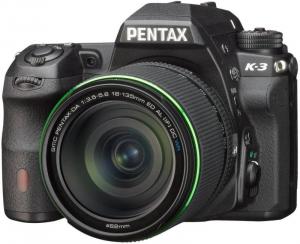 The K3 measures 13x9.5x15cm the last figure with the lens fully in, add another 6cm for fully zoomed out, surely a situation that should be used very rarely and then only when mounted on a weighty tripod. The camera and lens weight is 1250 grams.

The right side has neck strap anchor point and below this a flip door that hides two SD card slots. Below this a rubberised door to take (optional) DC power. The base has the solid battery bay behind a twist lock on the door and further along a tripod screw. The left side has the other neck strap anchor point and a rubberised door with USB3 port and a mini HDMI port. The face has whatever lens you fit, a button to flip up the built in flash, this raises it 4cm above the top of the unit it can never be nearer than 11cm from the lens. There are also button for manual or auto focus and other buttons to control how the lens works with the camera body.

The top has a 12 position wheel; the review button is tucked under the lip along with another well marked button. Next is the padded viewfinder and on top of that a slider that when removed allows the fitment of an external flash. A 3.5x2cm display has the rear part of the top with a further two well-marked buttons then the shutter release and on/off button in front of it on a protrusion ideally placed for the finger to operate. On the same lip to the right of the viewfinder is a one touch video capture button along with three further well marked controls.

The 7.2x4.8cm TFT dominates the back and this shows lots of information useful to the user before capture. The image captured is then shown on it for a pre-determined time the TFT is also live during video capture.

At the right edge is an enlarged rubberised section for your thumb two further buttons to its left then lower down the ubiquitous five position joystick control and finally a line of three more buttons. As I have said more than once these are all well marked but this is a camera that needs time to get to know the controls and this means read and reread the manual.

I took some reasonable video at a range of rates which was more than acceptable but you would not buy this unit to capture video, this is a still camera and all the images I took both with and without the built in flash were fine. Low light images were also good when the unit was secured on a tripod as were those taken with a lot of zoom.