Taking your mobile music player for a ride can now have an Australian flavour. 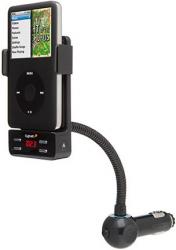 I have to admit that until very recently I was totally unaware of Cygnett, a company immersed in the development of accessories to enhance the iPod and MP3 music experience.  Set up in 2003, Cygnett has expanded into an international company with its headquarters in Australia and offices located around the globe.  The company came to my attention with the arrival of its GrooveTransmit product for review.

Designed and developed in Australia with manufacturing being carried out in China, the GrooveTransmit is an iPod and iPhone FM transmitter that also offers MP3 player connectivity.  The kit consists of a docking cradle; gooseneck style cigarette lighter adapter; stereo audio lead; and a small rubber foam support for use with the iPod nano, G1, G2 and G4 models.  You also get a 10-page mini Quick Start Guide.

With dimensions of 100 x 58 x 20mm, the black docking cradle has two adjustable arms and a lip that holds the iPod connection and various controls.  The two stubby arms can extend outwards so allowing the positioning of various iPod models on the docking connector.  These arms, which feature rubber pads to help protect the inserted iPod, are controlled by a small slider switch on the rear of the cradle.  Also found on the rear of the cradle is an adjustment knob for giving additional support to the back of the iPod device.

The gooseneck-style arm slots into a compartment on the rear of the cradle.  The other end of the arm holds the cigarette lighter plug through which the unit receives power.  With the plug inserted in the cigarette lighter socket, you can bend the gooseneck portion so that the iPod and the cradle controls are clearly visible and easily accessible.  While this system might be suitable for the dashboard layout of many cars, it certainly did not suit the arrangement in my Honda Civic.

The only way I could insert the GrooveTransmit into the cigarette lighter socket was to position the cradle and its iPod device upside down.  No matter how much I tried to twist the gooseneck, the result was still the same – an upside down arrangement.  It did occur to me that this situation could be considered appropriate as the product was from Australia, a place some think of as being upside down.

Fortunately this arrangement, while inconvenient, did not interfere with other aspects of the product’s functionality.  There was easy access to the power button which is located on the bulbous cigarette lighter plug.  You can manually adjust the frequency to be used or you could opt for an automatic scan by holding down the two frequency buttons that you will find on either side of the lip.  In my case the latter option was my preferred choice as it removed the need to read the upside down frequency display.  Up to four different frequencies can be stored as pre-sets and recalled when necessary.  GrooveTransmit supports frequencies from 88.1 – 107.9MHz.

The upside down positioning of the cradle and iPod (I was using the iPod Classic), not surprisingly, has no adverse effect on audio quality which was more than acceptable.  As well as delivering crisp audio quality, the GrooveTransmit also recharges the iPod device while it is connected.

Rather than restrict the use of this device to the ubiquitous iPod family, this Cygnett device also supports the use of MP3 players.  To this end you get an audio lead with 3.5mm jack plugs to link the player to a connection socket on the cradle.  Having sampled the audio quality delivered from the iPod Classic I was extremely disappointed with the output from the MP3 player.  There was no comparison between the two.  It was not until I had turned the volume up several levels that I was able to hear any audio.  There was also noticeable crackle that had not been evident when using the iPod.

While I would be perfectly happy using this product with an iPod as the audio source, I would not consider using it with my MP3 player.  Other FM transmitters supporting iPod and MP3 players had no problems switching between the two types of player.  Cygnett has priced the GrooveTransmit at £49.99.