First it was the Ultra then the Mino came along. Now we have an enhanced version of the Mino that promises improved image quality. 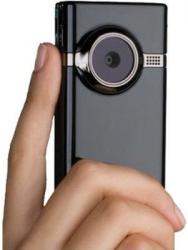 Adding to its family of pocket sized camcorders, Flip Video has produced the latest version of its Flip Mino product.  This is the Flip Mino HD.  As its title implies, this product adds high definition capabilities to the video capture and display features found in the original Flip Mino device.

The overall shape and finger-print attracting black reflective casing (the supplied soft carry pouch can serve as a cleaning cloth to remove the worst smears) are all too familiar to users of the previous version of the Mino.  At first glance it would be hard to distinguish this unit from the original Flip Mino.  The phrase “like peas in a pod” immediately springs to mind but, on closer examination, there are some differences.  The letter “HD” appear on the rear of the device while the trim found around the lens and the body of the device is of a darker hue than previously which gives a slightly more subdued look to the unit.  With regards to actual size and weight there is no difference with the Mino HD measuring 100 x 50 x 15mm and weighing 3.3oz.

The unit’s layout remains the same.  The 1.5-inch, non-glare LCD display sits on top of a control panel made up of a centrally mounted red button, to start/stop recording, surrounded by touch-sensitive buttons for fast forward, rewind, zoom, playback and delete.  The last two controls are positioned within circular indentations.  Recording time remains the same 60 minutes maximum while resolution is now 1280 x 720 for widescreen 16:9 display.  To facilitate the High Density aspect, internal memory has been doubled to 4GB.  Side mounted power on/off and USB slip connection release make up the rest of the controls.  On the same side as the USB flip release is a 3.5mm jack socket for linking the Mino HD to a television via the supplied TV cable.

Simplicity is to the fore when using this camcorder.  You simply click the red button, making any necessary zoom in/out adjustments, and watch the screen as you capture content.  A second click of the red button stops the recording.  You can review content on the Mino’s screen, opt for a widescreen approach of a television or transfer clips to your computer (Windows and Mac supported).

By activating the flip mechanism, you release the spring-powered USB connector allowing you to attach the Mino HD to your computer.  On the first occasion the Mino HD will automatically install itself and set up its FlipShare software.  A reboot will be required to complete the process.  The FlipShare software automatically detects video clips on both the Mino HD device and the computer.  Preview thumbnails with date details are displayed.  You can view clips and transfer them in either direction between the camcorder and computer, plus send clips by email or publish them online.  Other available options include capturing a still image from a clip, make a greetings card or splice together a number of clips using various themes.

The Mino HD is powered by its internal Li-ion battery.  This is automatically recharged whenever the Mino HD is attached to a computer.  You can also recharge the battery direct from the mains if you have access to a USB supported three-pin plug.

While you hardly expect to get the same quality as a top-of-the-range High Definition camcorder with a price to match, the Flip Mino HD is more than capable of producing reasonable results even in low light conditions.  There is an improvement over the video quality achieved by the original Flip Mino.  However I was unable to detect any improvement with the captured audio content.  For a fun, social device that is easy to use in a variety of situations, the Flip Mino HD is a product that should not disappoint.

Pricing has been set at £169.99 with the product being available from major retailers such as Amazon and PC World.  Windows users will require a Pentium 4 2.0GHZ processor, 512MB RAM (2.0GB if using Vista) running Windows XP SP2 and later.  For Mac users you will need a Power PC G4 1.0GHz or Intel equivalent with 512MB RAM and OS X Tiger 10.4 and later.

Flip Mino Hd has great ipod design,simple to use, no fuss approach ,
fun to use,great for kids to use, fits into a pocket.

My verdict the flip mino hd is not designed to compete with a larger camcorder, like a samsung HMX20C or Cannon HF 100, but as a stand alone fun unit, it scores.