A picture, so they say, may be worth a thousand words but sometimes the image does not tell the complete story. Images, especially those of celebrities, have sometimes been doctored to enhance and modify the original image by specialist using software such as PortraitPro 19 from Anthropics Technology. 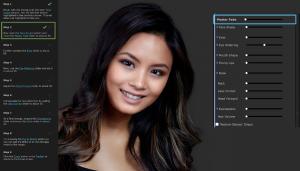 This product is available in Standard, Studio and Studio Max versions with this review being based on the top-of-the-range 64-bit PortraitPro 19 Studio Max offering.

As its title should indicate, this software's main focus is concerned with the facial features of the subject featured in an image.  This software does work best when dealing with a full face or profile view of the main character featured in the image.  As part of its installation routine the software will check the host system for any Adobe Photoshop software and, if found, will offer to include an appropriate plug-in so that it can work alongside the Adobe title.

When you first fire up this software you are presented with a split screen view of the initial facilities.  On the right is an option to load a single image requiring attention or a batch of images that will need some work on them.  Taking over the left side and greater screen area is a tutorial feature that will lead you through some of the program's topics in the form of videos and  step-by-step tutorials.  I was a little disappointed to discover that the video content was silent with no commentary to add weight to the visual images.

Once you have viewed the individual videos on offer, you are then moved on to the more useful tutorials that lead the user through the process of carrying out the task of enhancing the current image forming part of the tutorial.  These task based on different aspects of the face, include the automatic face detection ability plus targeting lips, eyebrows, nose, eyes and hair which are enclosed within purple markers.  Further tasks involving skin smoothing, lighting and face sculpting are covered.  In fact you can carry out face sculpting with a sample image as you adjust features such as skin colouring, make-up, eyes, mouth and nose. plus hair using a series of slider bars which are a constant feature throughout the program.  To help you make necessary selections and adjustments, you can option to display before and after views of the face under enhancement or, if you prefer, just show either the before or after image.

Of course, if you wish, you can ignore the tutorial videos and step-by-step instructions  and get straight down to work with image(s) of you own choosing.  The program supports most graphic file formats including JPG, TIF, PNG and RAW.  As mentioned earlier the software will automatically recognise the face area in the current image and draw purple markers around facial elements.

In some cases you might need to make some slight adjustments to the software's selection of areas but this should not really be necessary.  I loaded an image of somebody wearing spectacles and having part of her face partially obscured by a pet.  Portrait Pro made an excellent attempt at facial and features recognition.  I was able to start working straight away without making any adjustments. as I moved on to tasks that included hair, lighting and background adjustment after working through the interactive tutorials.

These interactive tutorials are one of the new and improved features incorporated in this 19 version of PortraitPro.  Leading the way with other new features is the introduction of ClearSkin™ 5 technology which is able to distinguish between and remove blemishes while still retaining freckles and moles on the face of the subject.  This technology enables version 19 of PortraitPro to remove facial flaws while retaining important details such as smile lines and eyelashes.  Other new features are Expression Tools to enhance smiles, frowns and more plus accurate lens correction to remove any distortion that may occur with wide angle lens on mobile phones.

Anthropics has also made improvements to several existing features of PortraitPro.  While I have generally been impressed in the past with PortraitPro's ability to find facial features, Anthropics has improved on the accuracy of this feature as it detects eyes, mouth, skin and hair.  You now have access to an improved Fix Lighting tool to remove harsh shadows from an image.  Other features to have benefitted from improvement are background editing, picture controls, hair editing and faster batch processing with the latter being exclusive to the Studio Max product.

Anthropics PortraitPro 19 Studio Max is an excellent piece of software.  It can enhance the facial images of your chosen subject in a variety of ways in a quick and efficient manner.  The top-of-the-range product under review is priced at £119.95.  PortraitPro Studio is priced at £59.95 with the Standard version costing £35.95.