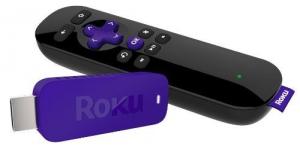 With your television set to receive content from a HDMI source and the streaming device attached, it will seek out your Wi-Fi home network and make the necessary connection.  After entering basic location details, software will be downloaded to the Roku device.  In order to complete the process you will need to log onto a specific website using your computer and enter the five-letter code being displayed on the television screen and, as a result, gain Internet access.

Now I have to admit that I had heard of a number of others who had encountered difficulties when trying to set up this product.  However I am pleased to report that my set-up procedure was totally trouble-free.  So much so that it failed to distract my attention from yet another England batting collapse in the Lords’ Test Match against India – but I can not hold that against Roku.

The Roku Streaming Stick comes with its own remote control unit powered by two AA batteries supplied in the box.  This remote unit differs in various ways from the one supplied with the earlier Roku 3 product.  There is no headset socket or volume level control nor does it have a built-in motion sensor enabling it to be used when playing games.  It is merely a remote unit.

The main Roku displayed menu is divided into three sections making up its Home screen.  These sections are Channels, the Roku Store and Settings.  Using the remote unit you can navigate through the various categories and options with specific controls to move back a stage or jump straight to the Home page.

As you might suppose, the Settings category offers a range of options relating to the look and performance of the Roku approach.  You can make adjustments to the audio and video settings depending upon your television’s capability.  You can choose from a small selection of themes and set up a screen saver.  Other options include changing the time zone, clock time and network details when appropriate.

By default your device will be automatically pre-loaded with a number of channels.  These channels could include NowTV, Netflix, BBC iPlayer, Demand 5 and Sky News.  In some cases a subscription fee will be required.  Also included on my review sample was Crackle which claims to deliver hundreds of full-length Hollywood movies and TV series.  However I am unable to report as to how well this channel performed as it had been discontinued for UK viewers from 1st April 2014 (and it was not an April Fool joke).

You can add other channels to the default list by visiting the Roku Store.  This location categorises its content under headings such as New, Most Popular, Top Paid, Film & TV, Music, Internet TV and News, Weather, Sport.  As you scroll through the available channels, you might seem to be spoilt for choice but there is a great deal of dross among the offerings.  In many cases the content is barely watchable and in some cases, with blurred and out-of-focus images, was totally unwatchable.  However you should find one or two gems, even with the free channels.

As well as some channels requiring fees, there is at least one channel that needs some additional software in order for it to work.  This is the MyMedia channel which was part of the default set-up on my device.  This channel allows you to access content stored on your home network.  You will need to download and install the free PlayOn software on your computer.  This software can be used to identify the location of the media to be accessed.

When you first select the MyMedia channel it will search for the PlayOn and software and create a link allowing the media to be accessed.  Well that is the way it is supposed to work but not in may case.  The anti-virus software (Sophos) on my computer blocked the connection.  The PlayOn support team suggested deactivating my anti-virus software but I was not prepared to take this risky option.  Instead I installed the PlayOn software on another computer running more amenable anti-virus software (Norton) and this allowed the link to be set up.

The Roku Streaming Stick can certainly open up new avenues of content and it does make for easy accessibility.  Just remember much of the content is second rate at best – the reason it is free could be because nobody wants it but fortunately not always so.  With some careful sifting you could find some reasonable viewing entertainment.  My review sample of the Roku Streaming Stick was supplied by Currys and PC World which currently list the product at £49.99.