All you need is a USB port and an aerial then you can watch TV or even record programs anywhere. In theory the supplied mini aerial will be enough but that depends on the reception in the area that you are viewing from. 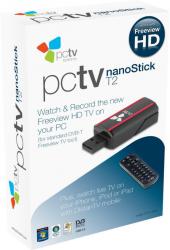 The PCTV Nano Stick just a USB stick with a connector on the end for an aerial lead, plug in to your PC or Notebook and install the software on the supplied CD and let it search for channels. Certainly I would initially use a roof or loft aerial to find the maximum number of channels, in my case it found 110, once tuned then – dependant on location – the mini aerial supplied may be enough.

The receiver is 7x2.4x1.6cm, one end fits into a USB port leaving 5cm exposed, but with either the supplied aerial or a roof/loft offering you will need around 8cm of clearance and also remember that the size may mean an adjoining USB port be blocked. One solution would be a short USB extension lead but no such lead is in the box.

The supplied aerial is 14.5cm tall and the base is magnetic so ideal to place on a metal frame of something like a window. The lead from the base to the plug is around 95cm so placement could possible cause some problems.

There is a ten language Quick Start Guide the English part is less than a side with three things to do prior to running the software on the supplied CD-ROM all very easy and accompanied by illustrations for each part of it.

The TV stick shows a green LED on top when a good signal is being received. On occasions – especially when using the supplied mini aerial – the initial start up of the software says no preview available but I found waiting around 30 seconds it then found the signal. Normally this was immediate with a roof or loft aerial connection.

Also on first start up it checks the time on your computer clock and tells you if its wrong and by how much, this can be vital if you are using the supplied TV software to record programs so to avoid a nag every time set the clock correctly.

Watching on a notebook the signal –via mini aerial – was enough to supply a decent image with very little frame drop for a window, however certain less powerful channels were less than perfect. However all channels when powered by a roof or loft aerial had enough power for a full screen display without any problems.

There are five or six icons in a line at the bottom of the window to the right of the channel name and these control the actions of the unit. The sixth icon appears when recording to allow you to pause the current recording.

Doing a basic install on a Windows 7 notebook took just under 300MB of hard disc space and the install time including the initial channel scan was around 15 minutes. This scan covers a wider spectrum than just the UK so takes somewhat longer.

The Getting Started Guide should be enough to set you up and then the main guide is on the CD in PDF format this is 117 pages long. However the main thing to remember is if you hover the mouse over the program icon (top left of screen) once in TV mode it displays a semi circle of eight icons five on outside and three on inside that give you access to everything. The icons are on the inner three Channel Information, Teletext and Electronic Program Guide. The outer five are Settings, Gallery, Recording Tasks, Radio and TV

A very nice little piece of kit, easy to install and use and if you have good reception then the mini aerial may be enough to keep you in touch when away from home. However if you are a long way away then redo the channel scan.

The PCTV Nano Stick is available from the first link below for £57.94 with free delivery.