Time for a Street Party

Recently I have been coming across more and more speaker products that rely on Bluetooth technology as the main method for delivering audio content to them. 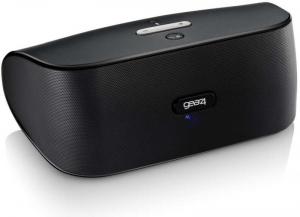 Not so long ago I took a look at the Aliph developed Jambox and Big Jambox that both fell into this category.  Now it is the turn of Gear4’s StreetParty Wireless device which is described as a portable speaker with speakerphone functionality.

Similar in some respects to the Jambox, the StreetParty Wireless unit is a Bluetooth device with the review unit being predominately black in colour.  With dimensions of 200 x 100 x 75mm (W x D x H), you are hardly likely to want to stick this product in a pocket, unless you are the type of have very large, baggy pockets, but its weight of 558g means it is portable without causing too much inconvenience.  Adopting a wedged-slab shape design, the overall look of the StreetParty Wireless is enhanced somewhat by the curved corners and backward sloping top which holds the volume adjustment, speakerphone button and built-in microphone.

Connection sockets for microUSB, used for charging the unit’s internal Lithium-ion battery, and AUX IN, for linking those devices that do not support Bluetooth connectivity, are located on the rear of the unit.  An audio lead, with a fairly generous 130cm length, is supplied in the box along with the USB lead.  These connection sockets are sandwiched between the on/off slider button on the right and an LED charging indicator on the left.  The micro-mesh front of this speaker unit displays the Gear4 logo with a blue light glowing below it to indicate when the unit is switched on.

Once you have fully charged the StreetParty Wireless device, either by connecting it to a computer or mains supply with an appropriate adapter, you can then pair it to your chosen Bluetooth audio source.  The Bluetooth smartphone or whatever device you are using will need to support Bluetooth 3.0 with A2DP (Advanced Audio Distribution Profile) / HFP (Hands free Profile) / HSP (Headset Profile).  If your device only supports an earlier version of the Bluetooth technology then that device will need to be connected to the AUX IN socket which does have the effect of reducing the functionality offered by the StreetParty Wireless.  With a device connected via AUX IN then the volume level can only be adjusted by using the controls on the attached device rather than the StreetParty Wireless own volume feature.  More importantly you will also lose the unit’s speaker phone functionality.

Pairing an appropriate Bluetooth device is relatively straightforward with clear easy-to-follow instructions listed in the small User Manual.  You do need to be aware that the StreetParty Wireless product can only be paired to one device at any time.  Once paired, you can listen to your favourite music being delivered by the StreetParty Wireless device. The volume level can be adjusted using the controls on the attached device and/or those on the StreetParty Wireless.  While the volume level, despite the product’s name, would not suffice for any street party I have been to, it should be enough for a reasonable sized room (and you can understand why Gear4 did not name this product ReasonableSizedRoomParty Wireless)

Incoming calls to your attached smartphone will interrupt the flow of music from the StreetParty Wireless and activate your smartphone’s normal response to this type of situation.   There is, however, no voice announcement as to the number of the incoming call. You can use the button positioned below the volume adjustment bar on top of the StreetParty Wireless to either accept with a single press or reject the call with a long hold.  The same button can be used to end an on-going call.  Rather disappointingly, the StreetParty Wireless did not pick up where it left off whether an incoming call was rejected or completed.  In fact I needed to restart the music playing from my smartphone (a Nokia Lumia 800) which could put the blame on the smartphone rather than the Gear4 device.

While lacking some of the functionality of the Jambox/Big Jambox product, the Gear4 StreetParty Wireless has the capability of delivering reasonable quality audio when paired with your smartphone or other Bluetooth device.  You should be able to get up to 8 hours of audio from the unit’s internal battery even at full volume for those who like everybody to share in their taste in music.  Gear4 has priced this product at £69.99.