As the front of the Instruction Manual calls it, CD / USB / SD / DAB / FM Digital Sound System with dock for iPod and iPhone. As I would say a proper audio system to suit everyone apart from those who still play LPs. 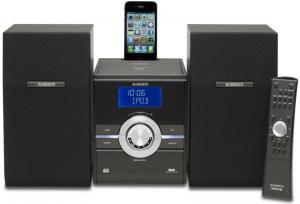 The main unit is 17x14x24cm with cables inserted in the rear. The first figure the height would need to be increased by the height of your ‘i’ device as this sits above the height mentioned and a couple of centimetres to allow insertion of CDs.

The pair of provided speakers are 17x12.5x7cm each. They are hard wired with a 2metre long lead to a double plug arrangement that fits into the back of the main unit, so the maximum spread of the speakers is 4metres.

There is of course a remote control which has a total of 28 buttons including the ubiquitous five position joystick control. While most actions can be duplicated on the unit itself some options are only available on the remote.

The controls on the unit are all on the face, top centre is the 6.7x3cm display, to the right of this the infra red connection.

All the other connections are either on or alongside a multi position joystick whose actions may require a check in the manual. The four buttons around it – two on each side – are better marked, this leaves a near invisible control for a drop down door that reveals two multi use buttons and an SD Card socket and USB port.

The rear has a USB connection (for upgrades) the rather short 60cm wire aerial for both FM and DAB, Auxiliary input sockets, AC input and the double speaker connection.

While I had reasonable radio reception for both DAB and FM I found attaching a further piece of wire to the aerial improved things as this enabled me to secure the end of the aerial higher than the basic 60cm would allow.

The display is very readable as it is white on blue, there are two large lines and three small lines splitting the two large lines. An assortment of explained icons are the top third and fifth line of the display with the time on the second line and various other items on the forth, this latter line displays the day of the week when it is in standby.

You can store up to ten presets for DAB and the same number for FM, I always find the latter more useful as you have to remember the frequency of the FM station to otherwise make the initial tuning. The presets work easily using six buttons on the remote, stations in positions one to five require one press and those in six to ten require button six to be pressed first. However I doubt anyone listens regularly to more than ten stations in total.

The 64 page Instruction Manual has lots of illustrations but once you have mastered the units controls surrounding the joystick and the remote it really should not need to be referred to that often for regular item uses.

It can play both MP3 and WMA on USB sticks, SD Cards and even CDs of them within certain numerical limits. Standard CDs of course also play fine.

With the Alarm feature you can choose to woken by Buzzer, DAB, FM, CD, USB, SD Card or your iPhone or iPod. There are Sleep, Snooze and even Nap features all well explained in the manual and are easy to setup.

The Roberts Sound 70 is available from the link below for £117.04 with free delivery.

i would receiver my buy!