This is the big brother to the recently reviewed Geneva M (18/07/08), there is an even larger unit (to big for my place) the XL full details on their site. So what does this large unit have to offer? 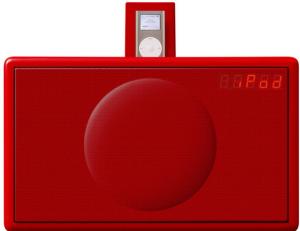 It is 44x35x28cm mine was black but they also do white and red. It weights just over 17 kilos. Like it’s smaller brother it is a rather good iPod playing device, that just for good measure can play CD’s – of various types – has an FM radio and an ‘Aux’ input to play anything that can connect via a 3.5mm jack plug. Unlike the ‘M’ it has a built in iPod dock and this does have four buttons but they are to control any item attached to the 3.5mm jack that unusually is in the iPod dock area. This is under a door so with no iPod inserted the smooth box like lines of the unit are not disturbed. When raised I was surprised to see it was silver grey rather than the shiny piano black of the rest of the unit.

The 15x5x1cm 23 key remote does everything for the iPod, FM radio and CD with the only display a one line red five large character item peering from behind the speaker grill at the top right of the unit.

The connections on the underside are plug for provided 1.5metre wire aerial for the FM radio. The mysterios ‘AIR’ connector, line in sockets and the mains plug input.

The remote has pairs of buttons for bass, treble and volume. Above this the on/off button and below this the diamond shape for the four controls for iPod or CD, back and forward at the sides and play/pause at the top and stop at the bottom. Below this are three rows of three the AIR button that currently does nothing, eject button for CD’s and Line In (should you wish to play any other item such as a record deck) the next two lines had me initially puzzled when I reviewed the ‘M’ as they are P S R E E T if you look down however if you read across (or consult the manual) all becomes clear as they read P R E S E T.

The CD is the slot loading type in the top of the unit with the lable inserted towards the front of the unit. I do find it a little friustrating having so little information. I yearn for either track elapsted, track remain, disc remain options but all you get is CD XX where ‘XX’ is the track number.

With the FM radio you use the back and forward keys on the remote to tune to the freqency you want. It shows on the display as the frequency say 105.40 (the five number also supports the .) once programmed into one of the Preset buttons it can be instantly returned. It also remembers the last station you were listerning to even if it has been switched off or disconected for some time. Certainly for radio listerning the built in speaker gives a good all round sound.

The unit uses something called ‘Embracing Sound’ and is capable of 100watts output from the beautiful wooden case. So what do you get behind the front grill its two 1inch tweeters and two 5.25inch woofers, given their close proximerty I assume the Embracing sound is responsible for the quality of the ensuing sound.

A few words about the stand it weights 13 kilos and fits onto the base allowing you to position the unit 20 inches high (this is more or less the same as I achieved using the box) but of course the stand looks far more elegant we must remember the lounge police.

There are a range of iPod sleeves so that all models should fit as well as the RCA jacks on leads just on nine feet long.

They should be available from a limited number of retailers including Selfridges, also you should be able to buy direct. On-line I found Amazon selling the Geneva Labs Model 'L' for £799.99, which includes shipping :