Now that Windows 8 is well and truly here -- even though an updated version will probably be out within the year -- there is a need for a detailed manual. This is particularly important because it is a significant redesign focussed on a touch-screen interface. "Windows 8 The Missing Manual" should meets the needs of power users as well as the rest of us who need to get to grips with this new environment. 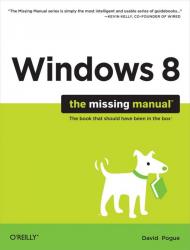 This massive 900 page volume is divided into logical sections to enable users new to Windows 8 to get to grips with the various aspects of this new operating system a key feature of which is its touch-screen interface. It also covers Windows RT which is, in essence, a variant of Windows designed to run on the lower power ARM chips that are widely used in tablets.

The opening section deals with the basics of the tile-based touchscreen-focused face of Windows 8 so as to enable the user to learn about the Start screen; the “Charm bar”, which provides direct access too many important functions, together with an introduction to the importance of the right-click of the mouse which now brings up shorts-cut menus.

The following section deals with all aspects of the desktop and, as it says, “the world that waits for you behind the Start screen”.  As well as menus, task & scroll bars, file handling, and recycle bins etc., it also covers built-in programs such as Windows Media Player, Wordpad and Speech Recognition.

The Windows Online group of chapters covers all the Internet related issues including setting up an Internet account and Windows Live Mail. Firewall, anti-spyware software and parental control are among the security issues are also covered in this section. This is followed by the hardware and peripherals section which describes how the Windows 8 relates with attached devices such as printers, discs, scanners and cameras etc.

Under the general heading of PC Health, space is devoted to back-up and troubleshooting as well as giving tips on how to make the PC run faster prior to going on to cover networking and related issues such as file sharing and remote access.

Browse through the early sections of this book in order to get a better feel and understanding of the new “tile” interface. Then, having started to get to grips with Windows 8 one can go to any appropriate section to find step-by-step instructions on how to carry out any particular task -- some of which will be new to you -- and so get on with the job.

Priced at £30.99, but available on Amazon for £19.83 this could well be a worthwhile investment and enable you to get a useful understanding of Windows 8.