An Internet of Things Tutorial

While printed documentation seems to be a thin of the past with today's hardware and software, there are still numerous books relating to computers including this McGraw Hill Education title. 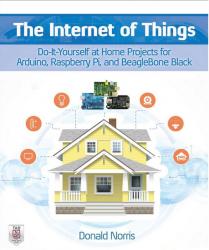 A current hot buzz phrase is that of “The Internet of Things”.  While it might seem like a recent additional to computer vocabulary, this phrase is from the last century.  It was first uttered by Kevin Ashton in 1999 (alright only just in the last century) while he was working for MIT’s Media Centre.  But what did he actually mean when combining a general classification of inanimate objects with the virtual and all-encompassing world of the Web?  His concept, which he named The Internet of Things, was of computers and other machines getting together, relaying data and then acting upon it.  This information was gleaned from a book with the rather lengthy title of The Internet of Things: Do-It-Yourself at Home Projects for Arduino, Raspberry Pi, and BeagleBone Black.

Aimed at those looking to get their hands dirty by working on various DIY projects using different computing platforms, this instructional offering is the work of Donald Norris.  This gentleman is currently teaching undergraduate and graduate IT courses at Southern New Hampshire University.  The author has over 30 years of teaching experience to sit alongside his 20 years of software development using a range of computing languages.  Norris likes to think of himself as a perpetual hobbyist and geek.  He is always trying out new approaches and attempting out-of-the-box experiments which might give you an idea as to what this book will offer to its readers and budding students.

When developing the projects covered by this book, Donald Norris used three separate platforms mentioned in the book’s title.  This approach was initially used to demonstrate that each platform would have its own strengths and weaknesses and thus more appropriate for dealing with specific tasks.  However Norris quickly discovered that the platforms had more in common than they had differences.  In fact with the Raspberry Pi and BeagleBone Back, Norris is of the opinion that they are identical from a software prospective.

The book’s first five chapters concentrate on the Raspberry Pi with the Model B being the tool of choice with its onboard Ethernet port and increased memory.  Following instructions regarding the setting up of the Raspberry Pi with Linux software, the first project is entitled LAMP which involves Linux, Apache, MySQL and Purl/PHP/Python for creating a data acquisition system.  Subsequent chapters then cover topics that include Object Orientated (OO) programming, analogue to digital conversion plus projects dealing with home temperature measurement system, home weather station, a webcam and the Pi camera.

The middle section of the book moves on to the Arduino board with the author working with the Windows 7 operating system.  Over the next three chapters, Norris covers various projects that feature aspects such as password protection, wireless sensor capability, and control delivered by smartphone or web browser.  The DIY projects include opening a garage door, a garden irrigation system that can report back on the moisture level of the soil plus the remote activation of lighting and similar devices in the home.

When using the BeagleBone Black board, Norris returns to the Linux operating system and draws comparisons with the Raspberry Pi.  Using the BeagleBone Black, Norris covers projects that involve using Cloud services with real-time streaming, displaying a text message on an LCD screen that has been sent via the Web plus machine-to-machine communication.

Published by McGraw Hill Education The Internet of Things: Do-It-Yourself at Home Projects for Arduino, Raspberry Pi and BeagleBone Black offers over 330 pages of instructional information made up of text, black and white illustrations and diagram with coding for carrying out various operations which appear to be more appropriate to those who belong to an American middle class section of society.  As well as the paper-based copy of the book priced at £13.59, there is an Ebook version of this title.