The addition of video to the iPod range is great for when you're on your travels. Despite the excellent quality screens on the iPod it's still nice to watch on a larger screen. Of course most video content is still available on DVD - not iPod. 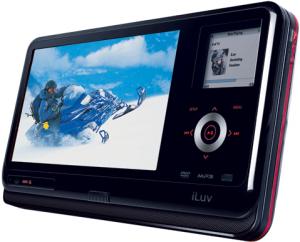 The iLuv i1155 is a great concept. Accepting that however good the Internet delivery may in future become for video distribution you'll still have a large collection of valuable DVDs. As much as you'd love to rip those onto your computer - and hence to your iPod - the big media companies don't want you to do that. They would rather you pay again. And for some people that have already upgraded their favourite VHS video to DVD - it's again and again!

The iLuv solution is to provide a good quality screen with an iPod dock and also hide a DVD player behind the screen. The screen itself is an 8.5" widescreen 16:9 aspect ratio LCD which provides a good clear image. The entire unit measures 285 x 600 x 55mm (WxHxD) and weighs approximately 1.2Kg. This weight includes an integrated Li-Polymer battery that, on a full charge, should give a good 3 hours use.

A rear adjustable stand folds out from the body to provide a stable support enabling the iLuv to be angled for different scenarios.

The front of the iLuv flips up, released by a catch, to reveal the internal DVD player and iPod Dock. The dock itself is 'interesting'. Most manufacturers, wary of Apples rapid 12 month product cycles, provide external iPod mounts and provide plenty of room around the device to allow for the various member of the growing iPod family. iLuv have eschewed this principle in favour of a fairly cramped internal iPod dock and then further constrained your choice of iPod by having a transpent window for your iPod screen.

The result of this decision is that you need to be very careful about which iPod you have if you want it to work with your iPod. The documentation states that the iLuv supports the iPod Classic, iPod Video and 3rd generation iPod Nano (i.e. not the ones recently released). Further note that although the 3rd generation iPod Nano will work - because of the positioning of the window your wee iPod Nano will need a 'booster cushion' the lift it up to the correct height to see out of the window - this adaptor is not included with the product. The one good point of this design is that it provides a good level of protection for your iPod.

I've tested the iLuv with a 3rd generation iPod Nano - a somewhat frustrating experience without the adaptor!

Control is either via an comprehensive remote control or through the controls on the front of the device. The layout of the front controls were somewhat confusing. A circular dial mimics the look of the iPod control ring, but not the function. The ring does not operate as a dial, instead separate illuminated, touch sensitive buttons around the dial control playback.

DVD is a more predictable technology and worked pretty much as expected. Flip up the top - insert the disk and press play.

Sound quality was good, however I did find the maximum volume was far too low, particularly when playing back from iPod. I found the volume (on maximum) OK when sitting in front of the screen, however trying to use it in the kitchen while washing up or cooking needed an extra couple of notches on the dial that were unfortunately missing.

A small cover on the left-hand edge of the device flips off to reveal sockets for two sets of headphones as well as video out. The headphones are a great ideal and make this product ideal as a means of entertaining the kids on a long car journey. With that in mind the product also comes with a 12V apator for the accessory socket.

A good concept with a good DVD player. The idea of integrating both traditional DVDs with the video iPod is a great idea. I think there are some rough edges with that integration at the moment, not least being the restricted subset of iPods with which this product is compatible.

Unfortunately iLuv have made a rod for their own back with a need to spin the product every year to keep up with the continual design changes imposed by Apple.