This is probably the best mini camcorder I have used, image quality is excellent and the sound is also better than other such devices. It is however not perfect as the camera side could definitely be improved from what is available. 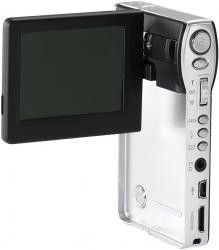 If this were just a camcorder I would seriously consider recommending it for a 5x5 award, the quality is that good. However as it also has a still camera capability that is less than perfect the total mark will have to be less.

The rim of the TFT is 6.5x5.4 with the viewable portion of the screen 5x3.8cm; it can be turned through 270 degrees. Open the screen and the unit turn on. Behind the screen is an on/off button that is really only useful for the latter.

It does not come with memory but throughout my tests I used a 2GB SD card that proved more than adequate, it fits behind a door in the top of the unit, in front of it is normal/macro slider switch. The front has only the lens while the base has a tripod screw. The rest of the controls are on the back of the unit and initially these can be confusing when trying to replay what you have shot (video or still) on the units TFT screen.

There are six buttons all clearly marked and then three sockets also well marked. The problem is only which need to be pushed to replay. The top button starts and stops video taking, the next button (oval rather than round) is the one to capture still images, next the zoom in (up) and out (down) button, next the HD button then the flash toggle button and finally the replay button (when in the right setting mode). Under this is the socket for Composite connection to TV, then, the USB connection that transfers files to PC and charges the internal solid battery and finally a mini HDMI a far easier method to show movies on a TV. Joy of joys all three cables are provided, unlike a recent mini camcorder that makes the mini HDMI lead an optional extra purchase. For some reason a mini HDMI to HDMI lead seems to (currently) be the equivalent of finding a snowman in the Sahara for other manufacturers.

I am not going to attempt to explain how to view movies on the unit, it is possible but it should be a lot more intuitive than it is. The software provided takes around 300MB of hard disc space and around 9 minutes to install. If you do not already have software that you like then this is well worth a look.

The TFT screen is very good even in reasonably bright light (I never had really strong sunlight so I can’t comment on taking images in that). You can of course replay still images on it but again finding how is less than easy, the unit can also play MP3 and once again getting to the play mode is not that easy.

As stated if this had just been a mini Camcorder like a ‘Flip’ or ‘Kodak’ offering it would be excellent. The extra abilities are what drags it down. I mentioned the flash button and this can also act as a light to enable movies to be taken in really poor light. So a word about the still images the quality is not good so I would not bother.

So while I love it as a Camcorder where you remove the card (or use the USB lead) to transfer movies to a PC it is excellent. Viewing on a TV using the HDMI lead is fine once you work out how. The MP3 ability (the 3.5 socket doubles as the A/V out and earbud socket) is really rather basic as just put in to say ‘we can do it’. The image quality of stills is strangely poor for a lens that can capture such good movies with sound as well. In would have been nice to be able to zoom while capturing videos in all formats.

Doing my Internet searches found the Veho Kuzo HD Camcorder/Camera at a best price of £87.99 including free delivery from the first link below.

These camera's are great, where can i buy another battery from for it