Pure One with Listen Later

While Pure were the first to offer SD card recording with The Bug many years ago. This version of Pure One, the 'Classic Series II', has a different approach by recording onto internal memory this allow you to listen later at a time to suit you. 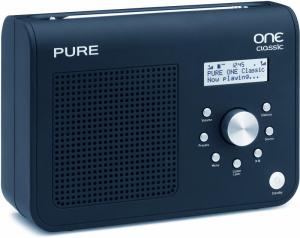 Outwardly it looks like a Pure One however there is of course a big difference in that it has the ability to record in your absence.

It measures 21x14x7cm with the second figure, the height, increased by up to 76cm dependant on how much you extend the eight piece rod aerial.

The right side has a column of three connections, mini USB, earbuds and Line In. The left side and base are both clear the back has the battery bay for either an optional ChargePak or 6x‘C’ cell batteries and also the DC input. This does increase the width as it is inset. The top has an indent for the rod aerial when it is collapsed.

This leaves the front, the left half is the speaker while the right half is the small 5x1.6cm display, an upturned horseshoe shaped set of seven buttons with a large control button in the centre and the on/off button bottom right.

First a few words on the display. With the back light off the display shows black on grey which is readable in daylight or a well lit room. Touching any button turns the display on for five seconds. When off you see a digital time displayed on the centre of three 16 character lines.

The seven buttons (horseshoe shape) are Volume, Presets, Menu, Listen Later, Play/Pause, Source and Stations. The centre large twist and or push knob by default is volume but changes according to which other button has been previously pressed.

There is an A5 Owners Manual the first 16 pages are in English, unless you are brand new to digital radios you will probably only need to glance at it for basic controls, things like setting presets, using the pause ability (answer the phone or call of nature) while listening live and also for the new feature of listen live will probably require reading the salient portion of text. In every section there are ample illustrations to guide you on. It does have a mistake as to the length of recording available but this is corrected on the website.

When first switched on, with the rod aerial fully extended, the unit will do an auto-tune. In my area it found 61 stations quite quickly. Pressing the source button changes to FM and once you press the Stations button you can scroll up or down the waveband by twisting the large twist knob and then push it when you have the frequency you want, this will often change to the station name. Setting it as a pre-set means tuning is a one time job. Pre-sets are remembered even when power is removed. The Pure One has 15 DAB and 15 FM pre-sets.

Pausing live radio stores up to 15 minutes in a buffer, the amount varies according to the bit rate being broadcast. This feature only works on DAB, the top line of the display says ReVu in inverted text and the centre line shows in brackets the length of elapsed time. Switching off will of course clear the contents from the buffer.

Listen Later means you set a time, a length, a day or days and the station you want to record. The minimum time is 15 minutes and it goes up in 15 minute increments. If you set more than one day (Weekdays, Every Day, Weekends) the second recording will over write the first even if the all the available space is not always used. The amount of available space is between 30 minutes and 90 minutes dependant on the bit rate. Once you set beyond 30 minutes you are warned there might not be enough room so you need to find out the bit rate broadcast by your station to be sure. To listen to a recording just press on/off and then Listen Later and it will start immediately, if you stop part way through you get the option to start at the beginning on from where you left off listening.

Doing my searches found the Pure One Classic Series II at £64.99 including free delivery from the first link.