Put together Logic3 with Ferrari and you get a collection of electronic audio products with Italian style. Included in this collection is a set of headphones. 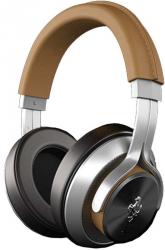 To many the mere mention of the company Ferrari brings up visions of high speed cars with the iconic red colour and a prancing horse.  However the company has other strings to its bow.  It is heavily involved in other areas especially those that deal with the design concept of bringing Italian flare to a range of products in partnerships with other companies such as Logic3.

First impressions of this product, even before I had opened the well-constructed rigid box, were decidedly positive.  This initial view was further enhanced by the discovery of a black, rigid, zipped carry case with a handle and the Ferrari silver prancing horse logo emblazoned on the front.  Opening this carry case revealed the headphones securely held in positioned in the moulded side of the case.  The other side of the case contained a soft, zipped pouch that was held in place by a Velcro strip.  This pouch contained various leads, adapters and a set of two AAA batteries that supply the power to drive the noise cancelling technology.

As you expect from a product designed by Ferrari, the headphones are constructed of machined lightweight metal for the arms and part of the over-the-ear cups.  The headband and ear cups are trimmed in good quality lambs’ leather.  For added comfort, the ear cups are well padded using a breathable material that helps keep your ears relatively cool.  The outside panel of both ear cups feature a silver prancing horse logo to re-enforce the Ferrari influence less you forget.

In order for the noise cancelling technology to perform its designated task, the headphones need to have access to a power source.  As is usual with devices of this type, the power is provided by the supplied batteries which are meant to slot into one of the ear cups.

To insert the batteries you are meant to twist the outside panel of one of the ear cups so that it comes away to reveal the battery compartment.  This proved to be a very frustrating exercise. I used finger pressure at first before moving on to try out a number of tools to twist the panel in the direction indicated by the folded A5 instruction card.  It was not until I tried twisting the panel in the opposite direction that I achieved success.  Once the batteries were inserted, replacing the panel was far easier.

As it arrives, and will probably be stored in its carry case, these headphones have no attached lead.  Instead you are provided with three separate audio leads for various types of situation plus a 6.3mm adapter jack and an airline adapter.  Each of the three leads has 3.5mm jack plugs at each end with the actual lead being covered in material.  All the various jack connections in this package are gold plated for better contacts.

Two of the supplied leads feature remote controls as part of their 120cm length.  One of the leads has a three-button remote which is meant for use with iPhones and the more recent iPod family products.  These buttons, using either short or long presses, allow you to play, pause, adjust the volume and skip through tracks in either direction.  There is also a lead with a single-button remote for play or pause functionality when used with some mobile phones but not the Android tablets I tested with the product.  The third lead, slightly shorter at 118cm, is for use with MP3 players and other devices that do not allow for remote control.

The Cavallino T350 Headphones certainly look stylish especially with those iconic prancing horses and can deliver excellent audio quality with its noise cancelling facility.  While the “R” and “L” indicators on the inside of the ear cups might be difficult to see in some lighting conditions, you have the second guide of the on/off switch being on the right ear cup and the attached lead being on the left ear cup when positioning these headphones the correct way round on your head.  The Cavallino is priced to reflect the build quality and its audio delivery with a price tag of £299.  This product will be available from premium, leading retailers.