Whatever your view of Apple and the company’s close control over its various products, you would be hard pressed not to agree that its design innovations have certainly stirred up sections of the IT industry.  Take, for instance, the appearance of the iPhone and its subsequent effect it has had on the competition.  Mobile phone manufacturers have been falling over themselves to produce an offering of similar style and functionality.  Nokia’s response is the 5800 XpressMusic handset.

Adopting a candy-bar style, the 5800 is predominately black in colour although it does have a metallic red band running around the edges.  The handset dimensions are 110 x 52 x 17mm (H x W x D).  The front of the unit is dominated by a touch screen.  This touch screen, measuring 4 x 7cm with a resolution of 360 x 640, is the resistive type.  As a result you need to apply a degree of pressure, either with a finger or the supplied stylus, in order for your action to be recognised.  Working in conjunction with the “need to tap” is a feature that gives off a slight buzz whenever a tap is detected. .  In most cases I found that I got a better response when using the stylus than a finger.

Surrounded by a raised border, the 5800’s screen automatically switches between portrait and landscape mode (with one or two exceptions) to suit the current application or orientation in which the device is held.  Sometimes this change can happen if you hold the handset at a slight angle and this can be a little disconcerting.  Generally the screen is viewable from various angles and portrays crisp graphics in an aspect ratio of 16:9.  I did find that sometimes I would struggle a little using the handset in outside daylight conditions

Three control keys sit at the base of the screen and these would light up green, white and red when the handset is switched on.  The green button, on the left, is designated the Call key while the right button shines red and is the End key.  Situated in the middle is the white or Menu key which brings up the various icons representing the tools and applications supplied with the 5800.

Running down the right side of the handset are volume controls, a screen and key lock switch, plus the camera capture button.  The top of the 5800 house a concealed Micro USB port, 3.5mm jack socket, mains charger socket and a recessed on/off power button.  Two covered access slots are located on the left side.  These provide the means to insert a memory card (Nokia supplies a MicroSD HC 8GB card as standard) and a SIM card.  I naturally assumed that the SIM card would be inserted by removing the back of the unit and the battery as generally happens.  However I was wrong and this approach is only required if you intend replacing the SIM card.  I wish more handsets had this ease-of-use method of inserting a SIM card.  Finally the base of the handset is almost virgin territory apart from a small pin-hole microphone.  The unit’s style is stored in a compartment on the back of the unit.

As the XpressMusic part of the product’s title indicates, the 5800 provides a range of music-based features.  The built-in player allows you to play and search through your music library.  Tracks can be purchased and downloaded from the Nokia Music Store.  The presence of the 3.5mm jack socket means you are not restricted to the bundled ear-bud style headset.  Without a doubt, audio output is better using a headset than using the unit’s own speakers.  FM radio is also included. 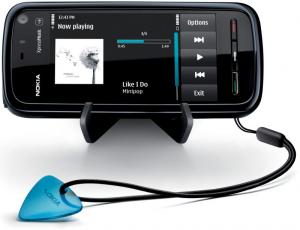 The Nokia 5800 has a 3.2 megapixel auto-focus camera that produces reasonable but not outstanding results.  There is a flash feature that seems a little underpowered while I also have some issues with the colour reproduction I got with some test shots.  Viewing images is fine in either portrait or landscape mode and you have the ability to zoom in and out by adjusting an on-screen control.  You can also capture video clips.

The size of the 5800’s screen does help when venturing on to the Web with landscape orientation being the preferred option.  By double-clicking the screen you can zoom in and out of pages and pan around with the aid of a finger or stylus.  The supplied browser may not be the best around but it does perform a satisfactory service.

Becoming almost as standard as Web browsing is the GPS option found on many mobile handsets. You can use this handset as a sat-nav device with either Nokia or Google Maps.  While Nokia Maps is quick when fixing a position, I was unable to get it to work in landscape mode.  Google Maps was more obliging but lacked the speed element.

The Nokia 5800 supports handwriting and includes a module that allows you to train the software to recognise your style of lower and upper case letters.  Some might prefer this approach to using the on-screen keyboard for messages and notes.

As this handset features a touch screen, it does seem rather churlish to complain about finger smears but this handset does suffer from this affliction.  Perhaps if a cleaning cloth had been included with the other accessories then I might have been more sympathetic.  You do get a power lead; ear-bud headphones with a remote attachment; USB lead; wrist strap; A/V lead; SDHC 8GB memory card; spare stylus; and a carry case.  Battery life is a more than adequate talk time of 525 minutes with 406 hours on standby.

This is a reasonable handset with touch screen capabilities but it still managed to make me feel that it should have been better,  Depending upon the type of contract, you could pick up free-of-charge while pay-as-you-go users can expect a bill in the region of £250.

Nokia 5800s design is same as Samsung Omnia or iPhone. The candy bar shape gives you rounded corners along with burgundy and black color scheme. The phone is 0.61 inch deep, 4.37 inches tall and 2.04 inches wide. This device is also a bit thicker than standard phones. The handset weighs 3.84 ounces and it feels quite comfortable in the hand.
http://www.nokiaphonereview.net/nokia-5800-xpress-music.html
Rating:

Your information about the nokia 5800 xpressmusic is really fine .This phone has very advanced features.