During my review of the Motorola XOOM Android 3.1 Tablet I found no real problems but the one discovered very near the end. It is a fast unit running what is currently the latest version of Android; it is rapid and far more intelligent than some other such units. 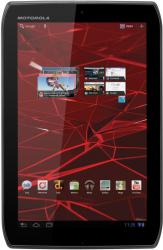 The Motorola XOOM measures 24.5x16.5x1.2cm and weights 705grams. The viewable screen is 21.5x13.5cm which gives the diagonal imperial measurement of 10.1inches which gives the 1280x800 resolution. You will need to read on to find what the only thing was that I found against this unit.

Unlike a Windows PC an Android tablet has its own way of touch even those running the same version of Android.

Going round the perimeter (assuming you are using it in landscape mode) the top has input for earbuds of headphones but in a quiet environment the internal speakers give an OK sound. Next to this is entry point for a SIM.

The left side has volume up and down buttons. The right side is clear. The bottom has entry points for DC as well as micro USB and the pin hole microphone. The back has the camera and LED flash as well as the on/off button.

So unlike some other tablets the sides are safe to hold without causing an unexpected action and all in all in feel smooth.

The only leads in the box I received were the USB and power leads, no instructions (I assume they were lost before it arrived with me) however there was an online guide which did much the same and most of the controls were easy enough to work out.

A full charge from empty takes around 210 minutes but this should give close to 600 minutes of use dependant on how it is used. When first released early in 2011 it came with version 3 of Android Honeycomb but this was updated to version 3.1 before I received it.

The processor (what makes it responsive) is dual core and this together with the 1GB or RAM and HD video looks very impressive. In fact when working with Wi-Fi at home or in the office things are as quick as on a recent PC. In fact with a suitable HDMI cable you can show items such as presentations on a large screen so it could be all you need to take with you and 700grams is a lot less weight than 2 kilos plus of most recent notebooks.

The back camera (5MP) takes rather good still and movie images and my slight delve into the world of games proved this is well up to the task. By now you want to know the one and only thing I have against it. Well it’s the price.

Not only is it expensive (in either the Wi-Fi or 3G versions) but things like the optional dock or keyboard are also pricey. Neither is actually required so they are true options. The onscreen keyboard is probably the best I have used.

If this can replace your notebook and your phone then I suppose the expense is justified if however there are programs it cannot run then sad to say it is exactly an expensive Tablet. However the Motorola XOOM is very nice.