Bored with the 'standard' jug kettle? Want a kettle that adds to your kitchen rather than being something you really want to hide in a cupboard? This might be just the thing for you! 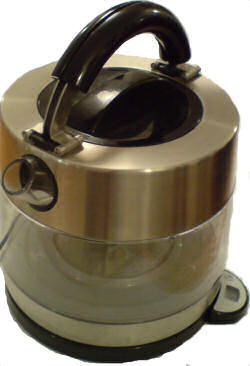 Rather than the current fashion for jug format the LaCafetiere kettle seems to hark back to an earlier age. The base is wider than a jug and the sides vertical. The main body is clear perspex allowing a clear view of the water as it boils and removing the need for floats or other devices to show how much water you have in the tank. My initial visual reaction was 'wow - something different - I like that'. My wife's was a little different - being not so keen. This started a little debate and an ad-hoc survey of all visitors to get their reaction. The result was mixed with people either loving it or not - but generally nothing in between. Into which camp do you fall?

Onto the more objective aspects of the kettle. As is becoming more common recently, this kettle incorporates a water filter. The result is that the main body is split into an upper chamber and a lower one. Fill the top with cold water and it filters down to the lower chamber. The designers have opted to make the upper chamber about half the size of the main area - meaning that if you want to filter more than about 900ml then you'll need fill wait then fill again. This isn't a great problem unless you're in the habit of making a lot of drinks in one go.

The filter system in use is the Aqua Optima that I covered in an earlier review. Basically all the things you really don't want going round your body are safely removed by way of a long-life filter. The 'double life' filter is claimed to last 60 days rather than the more common 30 days for competing systems. As I've said before, we don't manage to get to 60 days in our area

where the water is particularly hard. One thing I think could have been safely ommitted from this product is a slightly tacky 60 day count-down timer which sticks out from the side of the kettle. These things do irritate me on several grounds. Firstly - in a very hard water area, the filter is unlikely to last 60 days before clogging up. You notice this when you get to the point where scum is floating on your cuppa. In the second - in areas where your water is good, the filter could quite easily last longer. Finally - on this particular product it's the only thing that really upsets the sophisticated lines. It's a small point though and I guess some people will find it useful!

Filtering speed was pretty good - with 40 seconds to filter one pint, enough for 2 good sized coffee mugs. You can also switch it on before it's finished filtering so this also speeds up time to beverage.

In addition to a unique look, being wide based with steep sides offers several practical advantages. Firstly it results in a larger capacity than many kettles, particularly those with filters where the mere presence of a filter and upper water chamber takes space. The maximum stated capacity is 1.7l, contrasted against 1.5l for the Russell Hobbs Purity kettle I reviewed recently. This larger capacity is ideal for small offices, or larger households! It also means the minimum amount of water you need to boil is reduced, allowing a quicker brew, and saving a little energy into the bargain.

Living in a hard-water area, I'm always interested in the effect of limescale on kitchen products - kettles in particular. I was very interested in the effects on this product with it's clear sides. Any lime-scale build up and you're going to notice! While of course the filter *should* remove lime-scale, filters do reach the end of their life and if you don't replace in time you're back to the usual problems of mixing hard water with a heater - lime-scale build up. As someone that decides when to replace a filter by when I get a film on my tea this is particularly relevant.

I'd expected the lime scale to build up on the heater base-plate and on the clear perspex walls, reducing the visual appeal. In fact build up did not appear on the sides of the kettle significantly, and what did appear was easily wiped away.

One surprise in this kettle comes when you want to fill it with water. I think like many people I'm used to holding a kettle under the tap and having some flap that saves me removing the lid. Not so in the case of LaCafetiere. Like more traditional kettles you have to twist the lid, remove it, fill the kettle then replace said lid. I found this a little cumbersome at first, particularly in relation to the handles at the top of the kettle. I got used to it though and after a couple of weeks it became second nature.

Weight might be an issue for some people - all that brushed aluminium doesn't come for free! This is one of the heaviest kettles I've come across. When empty it weighs in at close to 2Kg, which compares to a traditional jug kettle at just over 1Kg (with same power element). That coupled with the slightly fiddly lid may mean this product is less suitable for anyone somewhat frail or infirm.

In summary - I love the look of this kettle. It's different and refreshing. I think the next version could do with fixing a few niggles, notably in filling it. It could also do with the ugly day counter being removed! If it's really a necessary feature then placing it in the lid would be much more ergonomically pleasing.

This is a fashion item as much as any in the kitchen, and that is reflected in the price. The La Cafetiere RRP is £49.99. Searching the Internet, the only place I could actually find it for sale was Amazon at the following link - and the price was indeed £49.99.

i have used this kettle for 2yrs  with no problems, i fill the kettle on the stand by folding down the handles and filling with a jug. only fault i have found is  the seal around the spout has been affected by the heat and i had to take it off. up to now it is still working with no drips . the display does bug me as i too think it looks tacky. other than that it looks as good as the day i bought it.a pleasure to use.