While most will say another iPod dock with radio but the Pioneer NAV1 is more than that. Us older people who still prefer our music on CD are satisfied as it also has a slot loading CD on the top and there are more features so read on. 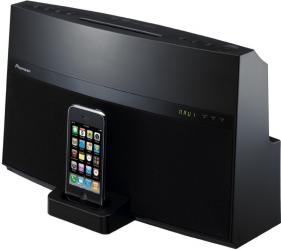 The Pioneer NAV1 measures 37x21x18cm the second figure the depth is only 10cm for most as only the iPod dock centre front and power lead centre back increase it to the full width, 4cm could protrude over whatever you sit it on as that is the dock width. Mine was white and black but they also do all black. It weighs 3.5kilos.

Before some get bored I will add the CD player can also play DVD’s so with the aid of leads and a TV you also have a DVD player.

The rear has a wire lead that is aerial for FM and for a wire lead, gives rather good results. There are a line of three AV sockets, a 3.5mm input, the power input and an HDMI socket making playing DVDs a great deal easier.

The base and both sides are clear while the front has only the iPOD dock at the base and a small one line display nearer the top than the base and towards the right side.

The top has seven small touch buttons four to the left of the CD/DVD slot unit and three to the right. What looks like a forth bigger button is actually a cover for a USB socket to enable you to play music from external sources such as a MP3 player not only by using the Auxiliary input but also any USB stick with suitable media.

While basic control of the unit is available from the buttons on top of the unit certain things such as clock, alarm and sleep timer can only be set from the 37 key remote control. You also need it to change radio stations.

Reading the 45 pages of the manual that are in English did not answer some questions. There must be some internal memory as you have presets and it also remembers the last played mode and the last listened radio station. However once mains power is removed it only kept the time and alarm settings for around ten minutes. I first assumed there was an internal battery as the handle grip in the back has what looks like a small ‘AA’ sized cover but this was not accessible and no mention was made in the manual about there being a battery backup.

So should you use this as an alarm clock do not have a power cut longer than ten minutes or you could be late for work.

Having an HDMI cable means that getting AV setting correct is not a problem as three leads in the back of the unit is not a great problem with colour coding but placing the same in the back of a TV is not that easy.

There is plenty of base in the two speakers (the vast majority of the front of the unit) in fact on occasions I found it too much. So choice of equalizer is perhaps down to where you place the unit rather than your musical preference. There are base and treble settings but these not only need the remote but probably the manual the first few times as they are buried in a sub setting. It would have been nice to have DAB radio not least for the ability of the unit to set time for itself.

One feature some may like is the ability to record from audio CD’s to a USB stick, the recordings are made in high quality 320mbps MP3 files, transfer rate is around 3x. However this feature will again require study of the manual and it does not work while the unit is playing a CD as it records in faster than real time. You cannot record from the FM radio. You are also recording blind if you are not using it connected to a TV as you cannot select tracks to record or bit rate.

To me this is something that could be good however in its current incarnation it leaves lots of questions. It does have clear sound for both CD and FM Radio, playing DVDs via HDMI or AV is interesting as it the CD recording to USB stick.