An unexpected offer of a short-term loan gave me the opportunity to try out a Nokia handset that combined 3G functionality and Carl Zeiss optics within a slider format.

The Mobile Shop
all networks 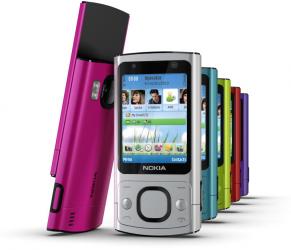 The Nokia 6700 Slide is, as its title indicates, a Nokia handset (what else) and of the slider variety.  This 3G handset is available in a variety of colours that should appeal to different types of users.  Those looking to make a fashion statement can choose from Pink, Petrol-blue, Red, Lime or Purple while, I feel, the greater majority will opt for the aluminium model such as the review unit I have been trying out recently.

In its closed state the handset’s dimensions are 95.2 x 46.1 x 15.9mm (H x W x D) with the height increasing to 123mm went the keypad element has smoothly slid out.  The handset weighs in at a reasonable 110g including the Li-Ion 860 mAh battery.  Overall the handset has a sturdy feel that should give you the confidence that it will stand up to the rigours of everyday use in various environments.

As often occurs with devices on this type, the front of the unit is dominated by the TFT which, in this case, is a 2.2-inch display capable of showing 16 million colours at 320 x 240 pixels.  This display can deliver a bright crisp display although it was not the quickest when switching between different views and updating the screen.  The display also suffers from the common affliction of finger smears.

Positioned beneath the screen is the control area.  Based around a large menu navigation button are the keys for left and right selection, home, cancel, call and end with the latter doubling as the power on/off switch.  Sliding the top forward reveals the 4 x 3 telephonic number pad which glows for a while to help illuminate the various keys.

Located at the top of the handset are connection sockets for the supplied ear-plugs, power input and a concealed Micro USB slot.  The compartment housing the Micro USB slot also holds the release catch for removing the back of the handset so that you can gain access to the SIM card, battery pack and a Micro SD card slot.  Due to the small size of this compartment and the release switch being partly inlaid I found it a rather fiddly operation to remove the back.

The Nokia 6700 Slide has two cameras.  The main camera is located on the rear of the handset.  This is a 5 megapixel model with Carl Zeiss optics and includes features such as auto focus, LED flash and various scenes modes.  Images can be captured at a resolution of 2592 x 1944 pixels with video being recorded at 15fps in VGA.  You can access this camera from the on-screen menu or by using the dedicated camera button found on the lower half of the right side of the handset.

The second camera is mainly for use when making video calls although it can be used to capture self-portraits.  You will need to switch to the secondary camera by selecting the appropriate option from the main camera’s menu selection.  Rather confusingly different buttons need to be pressed to capture images with these two cameras.

As is Nokia’s usual practice the 7600 Slide is based on Symbian platform and uses version 9.3 with S60 software.  The standard collection of telephonic features, including phonebook, calendar, clock, ToDo list, and Notes, are available along with email and predictive text messaging.  A built-in music player supports WMA, AAC, MP3 and WAV formats amongst others.  There is a choice of ring tones and a vibrating alert.  You can download Java games to supplement the single offering of Bounce Tales.

This is a Quad band phone offering 1900GSM, 1800GSM, 900GSM, 850GSM plus HSDPA2100, 1900 and 900 Networks.  For web browsing you get the standard S60 offering with support for EDGE, HSCSD and GPRS to help deliver high speed connectivity.  Sadly WiFi is a notable omission but you do get Bluetooth.

Taking care of memory issues is the built-in 45MB of memory which some might consider less than generous but there is an option to expand this by a further 16GB using the Micro USB slot.  A 2GB card is included in the box.  Battery life should give up to 4 hours GSM talk time or 300 hours on standby while music lovers can expect 29 hours of listening time.

The Nokia 6700 Slide phone is an attractive looking phone that you would not be ashamed to be seen using.  It is also the first handset that I have seen that comes with a mains power plug that can be compressed into a smaller size by depressing one of the three pins into the body of the plug.  This handset is available for £149.99 on a PAYG. On contract Virgin Media have the Nokia 6700 available on a £10/month tariff on the following link:

Nokia 6500 slide masters in alluring the mind of consumers. The phone has loads and loads of useful features. The mobile with a metal body weighs just 125 gms and with extremely sleek dimensions. The GSM handset is a 3G enabled phone with Quad-Band functionality.
Rating:

Wow!! this product really sound's great. Its features are driving me to buy this.
Rating:

I neglected to mention during my review of the Nokia 6700 Slide that the product had ben provided by Virgin Media.  The company is currently supplying the handset free when you take out a Virgin Media £10 a month tariff which seems like a bargain.  Check out this link http://www.virginmobile.com/vm/viewHandsetWithAllTariffs.do?offeringId=2964832