It's a while since I've looked at a hard-disk video recorder so I was eager to see what innovations the SmartBox 8320HD could bring to our family entertainment. 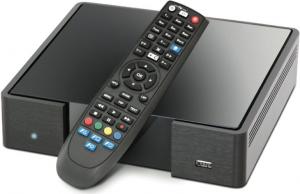 First of all the basics. The product name, "SmartBox 8320HD", should be the first clue that this is one of the recent FreeView HD receivers. It includes two independent tuners allowing various combinations or watching and recording different channels. Recording is to an internal 320GB hard disk allowing many hours of happy recording!

As well as the familiar FreeView receiver and video recording functions the SmartBox offers access to various online services including the BBC i-Player, Sky Player and Fetch-TV. I'm sure many people by now are familiar with the Beebs catch-up service. Sky Player offers access to a range of Sky programming but this does require a separate subscription and charge from Sky. Their minimum subscription is £15/month for the Entertainment Pack.

FetchTV provides an on-line pay-per-view movie library, again downloaded over the Internet. Registration for the service is free and then you pay for each movie you watch. Having paid you then have 7 days in which to watch your movie. Once you start watching you can finish any time within the following 24 hours - useful if you get interupted part way through. Much more convenient at this time of year than having to brave the elements to visit the video store!

Do bear in mind that all these on-line services all use quite a lot of bandwidth so if you're on a limited bandwidth contract then take care! Sky Player does answer one of the biggest barriers for many people to using FreeView - the lack of Sky Sports. Note however that it's not possible to record programmes from Sky or other on-line sources.

Visually we have a square box measuring 20cm x 20cm with a height of 4.5cm. Apart from a USB connector to the front all other connectors for the device are to the rear and include a power, Ethernet RJ45, aerial in and out, HDMI, S-Video, left/right audio and an optical audio link. You'll need cables to connect to your other equipment and the product comes with and HDMI lead, S-Video to SCART and an Ethernet cable.

In my case I connected the SmartBox to my TV via HDMI giving very good results for both video and audio. The only visual indicator on the box is a single LED. Everything else is on-screen and controlled via the provided remote control.

To use the on-line services you'll have to connect to a home network. You can connect either using wired Ethernet  to your router (preferred) or, if that's not practical, then via a built in WiFi. WiFi does have bandwidth limitations and can suffer from performance degradation if the signal has to go through many walls so if you have problems then do take a look at PowerLine as an option (I use this throughout my house).

I've been using the SmartBox for around a week now making use of most of the services. The video record function provides all the feature one has come to expect from such a system including the ability to "pause live TV". I quite happily recorded a few films to watch with the kids.

One of my biggest gripes with PVRs in the past has been reliability. With a large internal hard-disk you can build up quite a collection of your favourite programmes. Regardless of how good the software is (and I've reviewed products where testing did seem to be an afterthought) you still have to possibility of mechanical failure of the disk. Be it hardware or software failure there is a chance to loose all those videos you've saved and mean to watch 'sometime'. I'm very pleased to find that this product allows backup to an external hard disk (although you can't save HD recordings in this way for some reason). Backup has to be to a hard-disk, I tried backing up to a USB memory stick but that wouldn't work. Instead I attached an old USB drive and had no problems saving the various recordings I'd made. Transfer can take a while because of the amount of data and the speed limits of USB, but you can continue to watch TV while the transfer continues in the background. Transferred videos are saved in MP2 format and I could quite happily play these back on my laptop with Windows Media Player.

If the choice of broadcast and online media still don't yield anything you want to watch then the SmartBox can also attach across your network to a Windows Media Server (provided automatically by Windows Media Player). This worked quite happily with my laptop allowing me to watch some family videos I had stored.

I was very impressed with the SmartBox 8320HD - without the network capabilities this is a very capable FreeView receiver and video recorder. As a frequent i-Player user though I love the way that I can now watch my favourite Beeb programmes without having to plug my laptop into the TV. The features are a little inconsistent between various video sources - it's not possible for example to pause Sky Player live TV - but on the whole this product is a good step forward in home entertainment and provides a good feature set for the price.

The SmartBox 8320HD is available from Tescos for £200 and will soon be available directly from FetchTV.

Many months post-launch there are still "issues" with the performance of the Smartbox.  The interface also leaves a lot to be desired.  However, Fetch are issuing new firmware and slowly making improvements - it remains to be seen how long they will continue to do so and what state the box will be in when they finally give up.