As well as its takeover of Pinnacles PCTV line up, Hauppauge has added to its portfolio product with the release of its WinTV-HVR 900 offering. 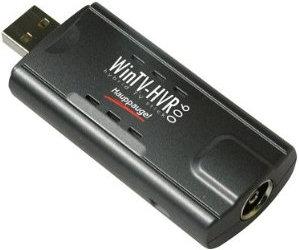 This product is a hybrid stick receiver which means it is capable of delivery both analogue and digital television signals for watching and recording on your Windows XP system.  Making up this kit is the USB stick device; IR (Infrared) remote control with battery; USB extension lead; audio/video input cable; portable TV antenna; folded Quick Installation Guide; and a software CD.  The USB receiver stick, measuring 80 x 31 x 15mm, is predominately dark grey in colour and features a standard television aerial connection socket on the base of the unit.  There is also a mini USB connection for using the audio/video cable.

Hauppauge recommends that you avoid using a USB hub when attaching the receiver unit due to power and bandwidth considerations.  The supplied USB extension lead does help a little with the placement of the USB receiver if, for whatever reason, you do not want to plug in direct in an available slot.  For instance, in my case, the only available slot meant that the receiver would protrude from the floor-mounted tower system and could be easily knocked.  However as the extension lead is only 24cm in length, you might have some difficult especially as you also have to factor in the aerial connection.

You could use the supplied portable antenna but in my tests this did not produce the best, or even acceptable, results and I quickly switched to a rooftop aerial as I shall explain a little later.  After connecting the stick receiver, you will need to install the software drivers and WinTV application supplied on the CD.  Installing the drivers was straightforward but the WinTV installation was a little strange.  Part-way through the procedure, the software insisted on rebooting the system.  The installation then carried on its merry way yet another reboot was needed at the conclusion of the procedure.  It should also be noted that if you decide to move the USB receiver to another port then the software will need to be re-installed.

The first time that WinTV is run, it will need to scan the airwaves for channels starting with analogue and then digital broadcasts.  With the supplied antenna, a total of 39 channels were identified.  However not all of these produced a viable signal.  In some cases the quality was of a reasonable standard but often all you got was static even with analogue ITV, Channel 4 and Five.  Switching to a rooftop aerial and re-running the scan produced far better results with more channels being recognised and the delivered quality being consistently good.

The WinTV interface is pleasant enough and provides you with options to cycle through the various channels in either direction.  You can switch to full screen mode plus capture video and still images.  Recording video can be activated instantly by clicking on the record button or using the WinTV Scheduler which works in conjunction with Windows Task Scheduler.  You can either enter the details yourself for a scheduled recording or click on the desired entry in the supplied 7-day EPG facility that is provided by Hauppauge.  In order for scheduled recording to be made your computer needs to be turned on but there is no need for WinTV to be running prior to the schedule as it will be automatically loaded as part of the process.

As mentioned earlier, an IR remote control is supplied as part of the package.  Using this control you can carry out many of the operations.  I did encounter one problem with the remote control.  One of the buttons on the remote was labelled Menu which I took to be the same as the Menu option on the WinTV interface.  I was wrong.  Instead the button brought up the Windows task switching feature but without the functionality to carry out any switching.  The only way to remove this piece of screen furniture was to press the Power Off button on the remote.

The Hauppauge WinTV-HVR 900 was capable of producing a good performance when attached to a rooftop aerial.  However the performance level dropped considerable when a portable antenna was in place.  The product’s installation could have been handled better and the remote control problem was worrying.

Minimum system requirements are for a 2.8GHz processor running Windows XP SP2 with USB 2.0 (it does not work with USB 1.1).  Expect to pay in the region of £61 for this produce.

hybrid video recorders and digital television products for both Windows and Mac. The company is named after the hamlet of Hauppauge, New York, in which it is based. It is sometimes misspelled as Happage