Apple revamp the iPod family for 2008

It's september so as (recent) history dictates it's time for Steve Jobs to take to the stage and show us what he hopes Santa will be delivering this year.

and from
The Apple Store

and from John Lewis

The changes this year though are more cosmetic than substantive. Last year gave us the innovative and totally cool iPod Touch and the video capable iPod Nano. This year we have a new slimline Touch and a new nano that seems to have slipped back a generation in design from that launched only 12 months back.

Let's look at the new Nano first. Last year saw a migration from long and thing to short and squat. This year sees a complete reversal of that back to tall and thin measuring 90.7x38.7x6.2mm (HxWxD) and weighs a notch under 37g. The display is the same size and same resolution (2", 320x240) but presented in portrait format. An accelerometer has been inherited from the iPod touch allowing you to turn the device on its side to watch video.

Memory has doubled with options of 8G and 16G and you have a choice of 9 colours - including a Product Red option. It's good to see that this time round all colours are available in both memory configurations - last year if you wanted anything other than silver you had to buy the larger version.

UK pricing for the new Nano from the Apple store is £109 for the 8G version and £149 for the 16G, which compares favourably with the existing range, but it does increase the entry level price for the Nano range (the 4G nano is currently available for £99).

And a facelift for the iPod Touch

Smaller and lighter are the keywords for this update - but new features seem thin on the ground. A big disappointment is the continued lack of Bluetooth support, included in the iPhone and a must for the growing range of stereo Bluetooth headsets. This is the one key missing feature from the Touch.

An extra 0.5mm has been shaved from the depth - down to 8.5mm, and 5g off the weight. Given how good the existing Touch feels I'm not convinced that will make a huge difference.

One addition is a built in speaker - it will be interesting to see the quality of that. 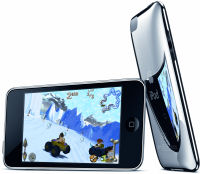 The memory configurations for the new Touch are the same as the old - 8G, 16G or 32G. Apples prices have apparently been reduced for the new release to increase the margin between the iPod and the iPhone. Checking Amazon prices for the existing range against those of the new on the Apple store - the new products are actually retailing at a $20 premium in the US. In the UK comparing John Lewis prices against Apple Store - UK prices are between £10 and £30 cheaper for the new range.

The entire iPod range is tied together through the iTunes product and the iTunes store - you don't get a choice with this!

Version 8, launched alongside the revamped iPods, the main enhancement touted by Apple is the new "Genius" facility which will automatically create playlists for you by analysing your existing media library. Click on a song you like and select "Genius" and iTunes will create a play-list comprising songs that go together. The little Genius will even recommend songs from the iTunes store that will supplement your own library.

iTunes 8 is available now so I've downloaded and had a quick play. Unfortunately I didn't get very far.

Unfortunately and quite unacceptably Apple continues to persist in requiring an iTunes Store account before enabling many features, even if you have no intention of buying anything. This annoys a lot of people (just search Google for "iTunes store without credit card"). Luckily I found this handy little video on how to create an account without divulging anything other than your name and address. The trick is to search around for a promotional iTunes voucher code.

Having created your iTunes account - and read the Genius terms and conditions (they can upload information about your library in anonymous form) it sets to work. In my case the analysis took some considerable time - but you can carry on using iTunes in the meantime. Once the analysis is complete your music view in iTunes will have a 'Genius' panel down the right hand side. This isn't actually very useful - click on an album and this panel will present a set of things you might like to buy.

At the bottom of the window there's a 'Genius' button. Select an album, click the button and you get a play-list from your current collection. I tried this on a Solitude Standing by Suzanne Vega - the resulting list included Annie Lenox, Dido, Alison Moyet and the Pretenders. There were some others that I wouldn't have included - but you can easily uncheck those then save the play list. I actually rather like the feature and will be having a longer play with it when I have five minutes.

So not much new this year from Apple. I said last year that Apple tends to pull a rabbit out of the bag just when people think there's not much more to do. This year would appear to be the year Apple run out of rabbits. The iPod is still a great product, let down by Apples restrictive software practices, but there's nothing partricularly new this time around.