A popular saying is that great things come in small packages, this certainly seems to be true in the case of this digital camera. 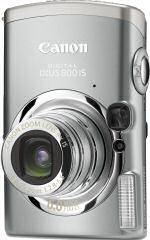 The Canon Ixus 800IS is 8.5x5.5x2cm and weights only around 200grams. Certainly the images taken with this camera look excellent. It is a 6mega pixel offering and has 4x optical zoom.

I have only very minor gripes to make about this unit so lets get them out of the way first. Images are stored on an SD card but only a 16MB card is supplied. Also there is no case or bag supplied and while the lens is covered the TFT display could easily get damaged in the pocket. I will also give - what I think - is the reason why they are not supplied - so the large retailers can either sell them separately adding to their margin or supply them themselves making the offering look even more attractive.

The face is two tone grey with the lens surround in silver, above this a small viewfinder and excellent flash. The right side has the anchor point for the wrist strap, the left side is blank while the base has optional tripod anchor point and cover for the rechargeable solid battery and SD card. The top has shutter release and this surrounded by the wide angle/telephoto adjustment.

This leaves the back and this is dominated by a 5x3.7cm TFT display that looks even bigger given the overall size of the unit. Above this is the rear of the viewfinder and the on/off button. On the right edge is a five position wheel that controls playback, auto and manual shooting as well as video shots. To the right of the TFT are three buttons and a five position rocker wheel that make all the adjustments.

While this is an easy to use unit for the novice - put it on auto and forget it - it also has a great deal to offer the intermediate user, 18 different shooting modes. While I am not an expert I take a lot of images and these are often admired by friends, some is done to my knowledge but a lot is down to the quality of the camera I am using. The battery needs to be removed and fitted into the supplied charger to charge, but no information such as time/date are lost even when the battery is missing for charging.

Recently it was my misfortune to take some images with a camera that had possibly the worst flash I have ever used. However I have had a couple of weeks using my own camera before this Canon offering arrived so any thought of 'chalk and cheese' is out of the window as my own unit intervened.

This camera takes excellent images both with and without flash in auto or manual mode and with the exception of the two minor gripes already mentioned I think is very nearly perfect. Depth of field is something a lot of small cameras lack, not so here. Sharpness of image and displaying of same both on the TFT and most of all when printed out, I only have an A4 printer but I have successfully printed a small portion of images at A4 probably equivalent to an A3 image.

The ability to support ISO 800 and image stabilizer technology means the image is captured quicker and the likelihood of camera shake is less. Also low light images are less likely to need flash. However when flash is used it gives excellent results.

This unit can also capture 640x480 movies at 30 FPS and while it is far short of a camcorder the results are surprisingly good.

After a chat with the editor he has agreed that the Canon ISUS 800IS is worth the very rarely awarded 5x5 award, looking at the list I see this is the first product awarded it this year, that's how rare they are.

The best price I found for the Ixus 800IS was £215 inc delivery from the link below, even at that price it is well worth the award.

Canon Ixus 850:  Is there any way to put a date stamp on the image other than in "postcard" mode?  Every other cheap digital camera I have ever owned could put a date stamp at any resolution.  Am I missing something here?   Other than that, it is a great camera.

Has anyone been able to use a 4Gb SDHC Class 2 card on the Canon IXUS 800is? I was told by Canon New Zealand that it should work before I bought the card.

However, I got a "memory error" when I tried to use it. I have been using 2Gb-cards with no problem. Is there any kind of firmware upgrade that will make the 4Gb card work?

Now available at the fantastic price of £211 via the top link.
Rating:

Speaking with the Canon product manager, it has not been withdrawn, when the 850 came out a lot of people though it had superceeded it but it was an addition to the range. In fact I have checked with Rankhour - the cheapest at the time and as far as I know they still are - and they have stock. There have still only been two five smiley reviews this year and this is one of them.
Rating:

Did not know it had be withdrawn I will try to find out why.
Rating:

Why has this camera apparently been withdrawn so soon after its introduction. Is there a problem?
Rating:

According to the product manager at Canon Yes.
Rating:

would the canon ixus 800 take a 2gb sd memory card, thanks