A Pair of Hubs

No matter how many USB ports you may have, there will probably be occasions when none are available to connect a new device. 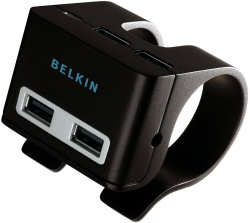 On a recent surfing expedition, I was checking out Belkin's various products and noted that the company currently had 29 different USB hubs as part of its product portfolio.  Admittedly in some cases the only difference was the colour of the hub but there was certainly enough choice to satisfy the discerning user.  Among the newer models were a clip-on hub and a flex hub which are the subjects of this review.

Both hubs are similar in one respect, they are of the 4-port category, but different in other aspects.  The Clip-on Hub, as you might surmise from its title, features a clip that allows it to be attached to the edge of your work desk or other suitable location.  This arrangement should free up some space on what could be a cluttered area judging by the current state of my own workspace.  You could also use this hub to help keep any cables connected to it under some sort of control by feeding them between the clip and whatever it is attached to.

Predominately black in colour, the clip-on hub splits its downstream ports between the front and top of the device.  In both cases, two ports are laid out horizontally side-by-side.  The upstream port is located on top of the hub and is of the mini style.  An appropriate USB lead is provided for connecting the hub to your computer.  You also get a power lead for when more power hungry devices are attached.  The clip-on hub has been priced at £21. 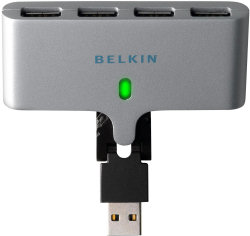 The Flex Hub is mainly silver in colour apart from the permanently attached upstream connection which is coloured black.  The upstream connection provides the flex capability of this device.  Making use of a pair of racket-style wheels, you have the ability to rotate the orientation of the hub, with its four downstream ports laid out side-by-side, unit through 180 degrees both vertically and horizontally.  As a result you do have greater flexibility when attaching certain devices such as stubby USB sticks or TV receiver units that would benefit from the greater freedom such an arrangement allows.

As this hub has been designed to fit directly into a port on the host computer, it is far more suitable for use with a laptop rather than a desktop machine.  While you could use the device with a USB extension cable this would tend to negate the flex feature which is the only real reason for purchasing this item. A power socket is located on the rear of the hub and a power lead is supplied.   The Flex Hub has been priced at £20.

While I have seen other USB hubs with the ability to adjust the orientation of the hub, this is the first time I have come across the clip-on style of hub.  In both cases there is a certain element of gimmick with these hubs but in some circumstances they could prove useful.  Given the choice I would probably opt for the Flex hub for use with my laptop.