All change as Apple revamp the iPod family

Apple have unveiled a torrent of changes to their iPod range of entertainment devices (they do a lot more than play music now!). Have the change done enough to boost Apples sales for another holiday season? 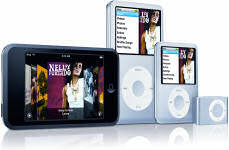 Steve Jobs, CEO of Apple, was in fine fettle delivering his 90 minute keynote speech to the Apple faithful this week as he rattled through product after product and feature after feature. All members of the range have been revamped, and a brand new product has been added to bring the iPhone interface to the media player family.

The shuffle is the least changed of the line up - all this gets is a revamped set of colours including a product red version, which when bought Apple will make a donation to this charity that aims to fund and distribute drugs to those suffering from Aids in Africa. 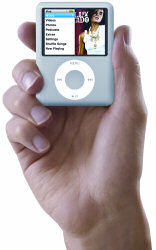 The nano has changed significantly from it's tall, slender form into a wider,squatter form factor. This change has been to allow a high-resolution screen to be added to the device that in turn allows picture browsing and video replay.

Although the screen is only 2" in size, it has the same 320x240 resolution as the traditional iPod video (now named iPod Classic - see below!). Apple claim this is the highest density screen on any portable media device at 204 pixels per inch.

As with the 'nano' there is also a Product Red variant.

The new screen has also facilitated a new user interface. A key feature of this is 'cover flow' - an interface that allows you to browse your music visually by seeing album covers. Sound interesting? It's been added throughout the range and certainly looked impressive in Apples demo.

The new screen has also opened up the option of games playing on this machine, and to encourage you there are three games included in the product as shipped with the ability to download others via iTunes.

There are two capacities - 4Gbytes and 8Gbytes. Most vendors are promising delivery in the next few weeks. Most are quoting what looks like a standard price. Both John Lewis and Amazon have the 4G Nano for £99, with the 8G at £129. 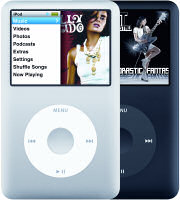 The original iPod - called simply 'iPod' has been renamed. It's now the iPod Classic, to identify it as the device that started the craze. The revamped model sports an entirely metal case and is even thinner than it's predecessor. The lowest capacity version now sports a massive 80Gbyte capacity. The other option is a 160Gbyte device.

As with other updates to the range, the iPod classic is given a revamped user interface. Stick should be available in the UK within the next few weeks, but most vendors are taking orders now.

This is a new addition to the family. Following on from the wow factor of the iPhone 'multi-touch' interface, which so far has only been released in the US, Apple have taken that look and feel and moved it to a media player.

Freed of the problem of negotiating with mobile operators across the globe, the iPod touch is to release world-wide.

But this is more than an iPod with a fancy new interface. Apple have created what looks to be a very appealing product. The screen is a crisp 3.5" with a resolution of 480x320 pixels. Although physically smaller than the highly acclaimed Sony PSPs 4.3" screen, the resolution is actually better than the 480x272 offered by the Sony product.

The iPod touch can be used in portrait or landscape mode, with automatic detection of how it's being held.

As well as tradition iPod functionality of music, photos and video, Apple have provided this device with a WiFi 802.11b/g wireless interface. As well as the hardware the system includes a tailored version of the Safari web-browser used on Apple computers.

Built-in Internet access also provides the opportunity for new applications. A variant of Apples flag-ship iTunes product has been built into the player - now if you have direct Internet access you can buy music and video directly from the iTunes store and download it to your iPod touch. Next time you connect to your computer any mobile purchased content is synchronised up for safe keeping.

Building on the Internet theme, Apple have also included specific access to the FaceBook social network and YouTube videos, increasing the appeal of this device further.

Two memory options are available : 8Gbytes and 16Gbytes. That's pretty huge for what you're likely to want to do with it. In terms of video even on 8G with resolution optimised for the small screen you're going to fit in a number of full length motion pictures.

The final point to note is this : Apple have crammed all this functionality into a package that is only 8mm thick and weighs 120 grams.

If this device lives up to it's manufacturers hopes then in my mind I think the Sony PSP just lost it's crown as the ideal mobile video device.

The product is promised in the next few weeks.

Apple seem to have done it again. Just when you can't imagine how else they can evolve the iPod range to keep it fresh, exciting and of course fashionable, they do just that!

All iPod images courtesy of Apple

The iPod Nano has become a favorite amongst people who like to listen to music while they work out. By strapping it to their arm as they job, an individual with a packed iPod Nano can be surprised with 1 in 2000 songs or 1 in 4000 different songs. In other words, the Nano provides a great opportunity for spontaneity in music.
http://www.applereviewed.net
Rating:

Features are not competitive with rival products at the same price. Even slower than unimpressive predecessor for music and file transfers. Initial collection of colors is muted and somewhat dull by comparison with the best past iPod models; some may find the polished texture to be too slippery. Included USB cable is tiny. Only one storage capacity.
http://www.applereviewed.net

Comet have a Christmas special allowing you to buy the 4G and 8G iPod Nanos at a discount. The discount is £10 for 8G Nano and £7 for 4G Nano. This brings the resulting price (with discount) to £119 for the 8G model and £92 for the 4G Nano. If you're thinking about buyinh some lucky person one of these then this might be the time to do it. The discount is available until the 14th December.

Click on this link and then, at the check out, enter either NANO10 for the discount on the 8G nano, and NANO7 for the 4G device.

The iPhone has now officially launched in the UK and available from November the 9th (why the delay?). The question has to be, should you buy one with long-term contractual tie-in to O2, or keep your existing phone and buy an iPod?

Well - the iPhone doesn't have a great spec compared to other phones. The camera is a mediocre 2M pixels. Memory is 8G (good) but no way to expand. Apart from the design - as a phone it's nothing special. Of course Apple have provided a very good design!

O2 are offering 18 month contracts, starting at £35 and lasting 18 months. Interestingly they do seem to be offering unlimited data-transfer, which if I'm reading right is a long overdue innovation in the mobile market and something that's required to get mobile applications accepted.

On the other hand, I think I'd stick with my Sony Ericsson K800i, which has a better camera, and look at one of the great new range of iPods. If you want the iPhone sleek look and feel then there's the iPod Touch that seems to do just about everything apart from be a phone.

What do you think? Who's tempted? Who's going to wait for the market to settle down? Who's going to take advantage of the superior phones the competition are bringing out the counter the perceived threat of the iPhone?