As Apple in the UK tend to be very tight with review items until now my only foray into their world is via an ancient iPod that is too old to be updated to anything like recent firmware. So this courtesy of Vodafone is my first use of an iPad the Mini 3. 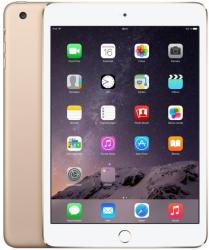 My first thoughts were not printable as I needed to enter username and password so many times then confirm all the same information numerous times as well as when I used any App it wanted the same £$%^&*” information however after that few details seemed to be needed. But to be fair by the time I had flicked through 100 pages of the near 300 page online manual things fell into place and as a confirmed PC user I had to admit that although I use Android all the time what you are allowed to do in this iPad is easy to use and for someone with no prior knowledge would probably be easy to learn. Having now washed my mouth out with soap I add you are never too old to learn, so far this is true.

The iPad Mini 3 is 20x13.5x.6cm it weights 339grams. The viewable screen is 16x12cm with the diagonal measurement being just less than 8inches.

Going round the sides of the unit you have the charging connector in the centre of the bottom and either side of this two speakers yes they are very small but when the unit is laid flat they give a rather good sound. The left side is clear the top has a 3.5mm headphone/earbud socket on the left and the on/off button on the right. The right side has a lock button and volume controls.

The back has the camera top left and the front has a single touch control below the screen that is your ‘Home’ button. A separate review you will read shortly is a pair of wireless earbuds mentioned here because while listening to some music on the iPad with them I was going through the very full featured settings menu and under battery it not only told me the battery level of the iPad but also of the wireless earbuds a feature I have never noticed on the many Android devices to pass over my desk.

The first minus point I noticed is the inability to zoom into a web page or email easily to view it larger this would not matter if you have perfect sight but for us older people small type fonts require a bit more work.

I used this out and about as well as in my home the latter on my network Wi-Fi and was happy with everything including the speed of installation of the Apps I installed from the iOS Store.

Out and about using the supplied Vodafone SIM was just as good a process and I also streamed music from people like Spotify while traveling and never noticed any speed problems in both 4g and 3G areas.

For me not being able to make or receive phone calls away from work/home is a plus but others will not agree but of course you could use a service like Skype and this means that only the people you want should be able to get through to you, now there’s a big plus.