Joining the list of titles now available from Focus Multimedia is Assassins Creed, a game in which you test your expertise at killing. 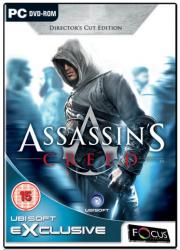 In Assassin’s Creed you take on the role of a character living in the present day or maybe a few years in the future.  Your character is an ancestor of an assassin, named Altair, who operated his deadly trade during the period of the Third Crusade.  The reason for mentioning this genetic connection between your character and Altair is that you will need to relive your ancestor’s memories as if you were actual carrying out the various tasks yourself.

This particular twist to the storyline, as you play a character who performs actions carried out by somebody long since dead, comes in the form of a machine known as the Animus.  Whether you regard the Animus as a machine or technology, the concept takes the form of a projector that is able to render genetic memories in 3D so that you can relive the experiences that involve killing nine Templars.

Following an excellent opening sequence with some great graphics, full 3D animation and watchable action, you are then introduced to your character who, it has to be said, is not a willing participant in the Animus experiment.  Fortunately, otherwise there would be no game to play, he is given no choice in the matter.  As part of your character’s immersion into the Animus environment you need to take part in a training session.

This should not be avoid as you will need to get use to the various combination of mouse and keyboard controls that you will need to master your character’s skills and expertise.  Looking around, moving, avoiding collisions, grabbing, throwing and sprinting as just some of the activities you will need to master.  In some cases you will need to simultaneously activate three separate controls in order to perform certain tasks.  The training exercises could cause a little confusion until you realise that the mouse buttons have been designated 0 and 1 rather than 1 and 2; this threw me for a while.

Once into the main section of the game, you become the assassin and quickly learn that this is not just a matter of providing a permanent farewell to your intended victims.  In order to be skilful and successful (getting caught is not fun), a certain amount of groundwork needs to be implemented so that you can carry out your tasks without being apprehended.  Information will need to be gathered by picking a pocket or two, ear-wigging and asking questions plus doing a bit of bartering by performing tasks for fellow assassins (do they actually have a guild for this type of profession) for a bit of tit-for-tat.

Your field of operation encompasses the three cities of Acre, Damascus and Jerusalem..  As with most of this game, the presentation of these three cities is excellent with some great graphics.  I suppose the beautiful scenery helps take away some of the deadly nature if your professional duties.  While your main victims are the Templars, which combine a religious and military presence, some collateral victims will need to be disposed off in the normal course of your work.

Remembering that a major part of an assassin’s skill set is that of stealth, does help you succeed when playing this game.  Often it is better to react to a situation rather than go headlong into action by challenging others.  Overall I was more impressed with the visual aspect of the game rather than the actual game play.

Focus Multimedia has priced Assassin’s Creed at £9.78.  Due to the high quality of the graphics and animation, you will need a fairly powerful system.  The minimum requirements consist of an Intel Core 2 Duo 2.0 processor with 2GB of RAM and 12GB of hard disk space.  You need to have either an Nvidia GeForce 6 series or ATI’s Radeon 9600 or higher graphics card.  Full support for DirectX 9.0 is also required.  The game will run on Windows XP SP2 and later.