Love your media player but annoyed about the piece of wire that is forever getting tangled, pulled from it's socket or just isn't long enough to reach the appropriate pocket? You need Bluetooth. 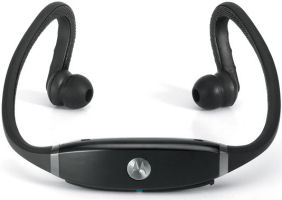 Motorola have joined the small but growing band of manufacturers providing Bluetooth stereo headsets with their Motorokr S9. As well as being a wireless way of listenning to stereo on your favourite Bluetooth enabled media player, it also includes a microphone so should you be using a phone it'll allow you to make calls.

Bluetooth on mobile phones is now very much the established norm on just about every handset beyond entry level devices and is now starting to make its way into dedicated media players such as the Sony Walkman NWZ-A829 ( read our review ). Notably of course the new iPod line still lags in this regard!

While the S9 is obviously ideal for the wide number of mobile phones equiped with excellent media playing capabilities, Motorola have not neglected the worlds most popular media player - the iPod. The small matter of a lack of Bluetooth on even the top of the range iPod Touch is solved with the D650 - a small almost featureless block with an iPod connector on one end. Plug this into your iPod and you magically have Bluetooth. Unfortunately the D650 is not currently sold separately - it's only available packaged with the S9 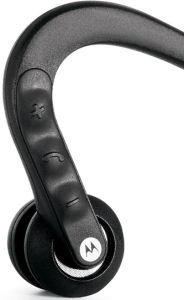 Back to the S9 headset. The ear-buds are effectively sprung via the rear headband - the tension from the band keeping everything in place. In use these were fairly comfortable for shorter periods of time - both round the house and out doing some fairly strenuous gardening. I did find that after a couple hours of continuous use I had a slightly sensitive area just above my right ear where the arm both presses and rubs as the rear weighted band bounces slightly as one moves.

Buttons on the arms allow you to control your media player and to answer calls. The left arm contains volume up/down and call answer, the right contains next/previous track and play/pause. These effectively allow you to leave your your phone/player safely tucked away out of site.

The internal battery will charge in two hours from an included USB adaptor. I couldn't find any official statement of how long a full charge will last. In my experiments I had in excess three hours continuous with capacity spare at the end (at that point my iPod was flat).

Pairing with either the iPod or a phone was a little fiddly, involving powering on the S9 and the searching from the phone. Sometimes it took several attempts and until I had sound coming out of the headphones I could never be completely sure it had worked.

The S9 for the actively inclined

The promotional material for the S9 builds the brand around activity including images of heavily muscled sporting types. This message is further enforced with a FitnessFirst promotion offering a monthly gym pass and health check. After wearing the headset around the house I was, to say the least, unconvinced about the suitabilty of the S9 for sport. Despite my reservations I decided to go for what I expected to be a very short run, anticipating a rather sore head. 20km later I had to admit that I was wrong - despite the same slightly sore spot above my ear it was none the worse for 90 minutes reasonably hard exercise, The ear buds stayed well and truely placed in my ears and the volume was loud enough and the fit good enough to overcome significant traffic noise on one stretch of road.

An unexpected benefit of the headset during running using an iPod Touch are the controls on the arms. Anyone that's been unfortunate enough to use a Touch for exercise will have discovered that the very cool touch sensitive screen is completely inappropriate and incompatible (read useless) with sweaty fingers. Firstly you have to use the slider to unlock the screen then you require the dexterity to adjust the virtual volume slider - something that so far I've failed to do without stopping. The S9 actually makes the iPod Touch a usable exercise media player!

Phone and iPod - at the same time

For those that like to keep their phone for phone calls and their iPod for music, the S9 is capable of pairing with both simultaneously - the phone using the headset service and the media player using the audio streaming service. In this mode you can listen to your iPod and have the phone automatically cut-in should you receive a call - very clever. In phone mode you hear the audio from the call in your left ear rather than both.

The status of the headset is conveyed with a single light that through a combination of blue, purple, red and green combined with long and short flashes manages to represent no less than 11 different pieces of information. I'll include my usual moan on behalf to the 25% of the male population that are colour blind - this system just doesn't work and you are left pretty much guessing the status of your device. While this excessive overloading of colour may be somewhat excusable on a tiny headset with limited space it really is un-necessary on something with as much space as the S9. Having recently tested an excellent BlueTooth headset that manages to include a very functional LCD status display I know this is possible. Unfortunately product designers very seldomely tend to be colour blind!

The S9 is a very good headset. There is not very much to dislike (apart from status). Sound quality is very good. The official price on the Motorola store is £79.99 but it is available for considerably less than this. The best price I've found has been £38.43 from an Amazon partner on the following link while The Car Phone Warehouse have the S9 available for £49.99 including free delivery on the second link:

The S9 is a very good headset. There is not very much to dislike (apart from status). Sound quality is very good. The official price on the Motorola store is $129.99, which includes the D650 Bluetooth adaptor. For those of you that just want the headset, Amazon have this available for $69.99 including shipping. You can also buy (in the U.S.) the D650 adaptor by itself for $53.88, again including shipping, very useful if you want to use other Bluetooth products with your iPod!

The S9 is a very good headset. There is not very much to dislike (apart from status). Sound quality is very good. The best price I've found is €79,90 from Amazon. Note though that this does not include the D650 Bluetooth adaptor.

Bose  quietcomfort3 headphones make great commuting partners You just plug in and  experience full-bodied, well-balanced audio that brings out the details in your  music.
Rating:

Absolutely no idea Harry. It should work with an *compliant* Bluetooth device - but Apple do like to be different. I tested with an iPod Touch - but the Bluetooth capability in that product was provided by a separate dongle given the somewhat poor decision on the part of Apple to leave out that feature - twice!

Unfortunately getting hold of any Apple load equipment is nigh on impossible - I guess they are successful enough and don't need independent reviews of their products published!

I'd be interested to hear other readers experiences of Bluetooth on the iPhone - can it really be that bad? If it is then that's just one more reason avoiding the iPhone.

So does this REALLY work with an iPhone?  I have found with other bluetooth headsets that when you use them with the iphone they play the music fine but they do not control the phone so you cannot receive calls on them.  Is this one any different - does it allow you to  receive calls on an iPhone? Has anyone tested that functionality? Any advice gratefully received!!