This is a music player and not as you might think a phone. In shape and size you could easily mistake it for a phone. To be precise it is a digital media player as it will play video as well as audio and of course it will display .jpg still images. 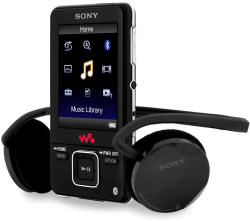 It has two buttons below the TFT screen as well as the ubiquitous five position joystick arrangement between them. The base has input for earbuds and the proprietary USB lead. The left side, the top and the back are all clear apart from a small indentation in the rear for a stand (not provided in my sample).

This leaves the right side that has a volume rocker, Bluetooth button, hold slider and wrist strap anchor point (not provided with my sample).

While the NWZ-A828 (8GB version) is advertised as yet I have seen none for this model the NWZ-A829. It does come with a CD-ROM providing Media Manager for Walkman 1.1, Quick Time, Windows Media Player 11 (although if you are using Vista that version is later) and an MP3 conversion tool to convert Atrac files to MP3.

Luckily it also contained a PDF file which it offers to install as part of the installation. As my unit was a white box sample I cannot comment on any documentation that may ship with the retail versions. The documentation supplied is for the 826, 828 and 829 versions so I assume the main difference is the size of the internal memory in each.

Battery life of over 30 hours is one of the claims and this I achieved while playing MP3 files. These can be transferred by Bluetooth or using the supplied Proprietary USB lead and either the Media Manager or Windows Media Player 11 (the PDF file mentions that Windows Media Player 10 may work but with possible problems. I found syncing with MP11 worked correctly and transfer of files was quick and efficient. I did try drag and drop but while this seemed to work the only files it would play were WMA ones. 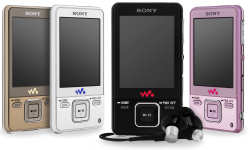 My unit was black but I believe that pink, gold and silver are also available. The model I was sent NWZ-A829 has the largest capacity stated to be able to store 62 hours of video or 3800 songs. The battery is said to last for over ten hours of video playback and 36 hours playing music.

The screen was clear and sharp and the video samples provided were fine. I did try loading some video of my own but this would not play (it did warn of this during transfer) but it can be used as a mule for moving data, a 16GB data transfer device is rather useful.

It did however transfer (drag and drop) jpg files without any problem the display was fine and the right side gave details of the time and date they were taken. This tended to appear as underneath (looked better) for landscape images. There are lots of options for various slide shows etc.

In fact the amount of choices for audio are huge with equalizers and cover art just two of the options. I never manually set the clock I assume it took the time and date when I synched. This pulses on the screen one second in eight once the tracks are playing no doubt how the 30 hours plus of battery life is achieved as screen drawing and display are heavier on battery. A push of a button brings back the title/artist/art etc of the normal display.

This is extremely new and not currently available from many retailers. The black variant is available from Amazon for £199.99 including shipping on the first link below :

The price for the NWZA829 directly from Sony is £229 and is available on the following link :