The latest incarnation of one of the best and easiest to use MP3 players the Sansa Clip, this one comes with 4GB of internal memory plus it also has a micro SD card slot so if 4GB is not enough you can add even more memory. 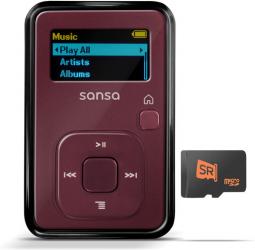 On first glance it looks very similar to the previous incarnation of the Sansa Clip but the clip on the back is more substantial and this unit has no rounded corners.

The USB connection (transfer data and charge) is on the left side near the top with the volume rocker below it. The top has just the on/off button while the bottom is clear. The back has only the clip that will hold itself on most pocket edges without problem the open end of the clip expands to 1.5cm.

The right side has 3.5mm earbud socket and the micro SD card slot. The face has the home button as well as the ubiquitous five position joystick button that controls the unit. Unlike some other units this is not purely an MP3 player.

As the unit comes in a box I mistakenly thought that I would not need the industrial scissors to get the unit and the earbuds and USB lead from the box. While the plastic innards show the player through a hole I see no reason to weld the two halves together as if it had no external box. So out with the scissors to extract the contents.

While I am having a moan the problem still exists with Windows XP SP3. As regular readers will know I found a problem ‘problems occurred your hardware may not work correctly’ with the previous Clip and despite trying it not only on my music storage system as well as a Netbook that I did not even have at the time I still get the same error. So I needed to transfer files via USB stick to Vista and Windows 7 systems that worked correctly.

I seem to remember that I tried it on a neighbours XP SP2 system that worked fine and I assume because the drivers were already correctly installed it still worked on SP3.

There is a small Quick Start Guide and the first seven pages have English as one of four languages but it should be enough as all you need is to plug the USB lead into the Sansa Clip Windows (apart from XP SP3) recognises it and creates two icons in My Computer the first one will be the internal memory the second one the micro SD card slot. Click on the first one click on Internal Memory folder and then on the Music folder and just drag and drop any MP3 (or WMA) files to it. When you remove the unit from the PC it will update the file list. Next time you switch on you can select any of the files or playlists or even (nice touch this) play the items you have just added.

So what other joys are in this tiny unit. It has a rather good FM Radio that uses the earbuds as an aerial. Unlike most units it tunes to the first found station and not just leaving you listerning to static. The next time you turn on it remembers the frequency of what you were last listening to and you can also use Presets to save your stations of choice.

It is also a rather neat voice recorder and after a lot of searching I found the pin hole microphone just under the top of the clip.

This is a nice easy to navigate and use MP3 player it has good tone and a range of settings on the settings menu.

Doing my Internet searches found the SanDisk Sansa Clip+ (8GB) at a best price of £49.99 including free delivery from the first link below.