When the choice of colours is Lava Black, Jungle Grey, Cosmopolitan White or Active Blue, then you should have a fairly good idea that the subject mater will be a Sony Ericsson mobile phone.

Available on plans
from £15 per month 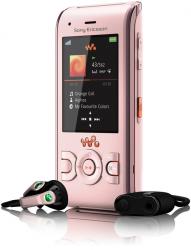 In this case the phone belongs to the Walkman series and bears the W595 designation.  The combination of the Active blue colouring with silver trimmings and slopping curves at the top and bottom of the unit give this handset a stylish appearance.  Measuring 100 x 47 x 14mm (H x W x D) when closed, the handset has a smooth sliding mechanism, increasing the height to 130mm, that can easily be used one-handed although this does tend to increase the risk of adding unwanted finger smears to the unit’s TFT screen.  While on the subject of the screen, this measures 2.2-inch diagonally and gives a bright clear display with a 240 x 320 pixel resolution.

Positioned just below the screen is the familiar Walkman logo perched on top of a general control feature arrangement.  The centrally positioned selection key/Walkman player control and circular navigation key is sandwiched between keys for call, end, on/off and activity menu.  In each case the keys are raised slightly from the body of the handset which helps negate the rather small size and odd shapes of these keys.  The raised key aspect is also used on the 3 x 4 alphanumeric telephonic keypad lay-out with these keys being of the slightly larger type.  The left side of the handset houses the proprietary Sony Ericsson connection for recharging the battery and linking via the supplied USB lead to a computer.  Volume and a dedicated Walkman key are on the handset’s right side.

As this handset belongs to the Walkman family, it should come as no surprise to hear that the music playing ability of this model is well to the fore.  There is the side mounted Walkman key plus various controls of the front of the unit to access the Walkman features when the handset is closed.  Based on the latest version (3.0) of the Walkman player, you can create and manage play-lists; shuffle tracks; change equaliser settings; and display the album art relevant to the current track.  The W595 also features Shake Control (the audio rather than camera variety).  Using Shake Control you can switch or shuffle tracks and change the volume level.  While I was not always successful at achieving the desired response with this feature, my results did improve with practice.  As part of the bundled music software you get SensMe™ for creating play-lists by mood, TrackID and Music DJ.  Audio quality is of a reasonable standard. 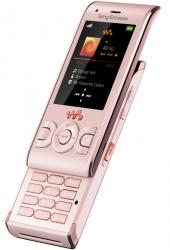 The W595’s built-in memory is 40MB and this can be supplemented by the use of a Memory Stick Micro card.  Sony Ericsson has bundled a 2GB card with the handset.  This card should allow you to store up to 500 MP3 tracks (AAC and eAAC+ formats are also supported).  As the memory card slot is tucked away in the battery compartment, it is not all that convenient to get at especially as the cover for this compartment does not have a quick release switch.  I found it a struggle to remove and replace this cover.

While the W595 has a 3.2 megapixel camera, it is not the most feature-rich component.  You can capture still images and video clips.  The camera’s zoom feature is limited to VGA mode with both auto-focus and flash capabilities missing completely. However you do have the option to exchange videos via YouTube.

The usual array of telephonic features such as text and video messaging, phone, email and Internet browsing are all supported with this quadband 3G unit.  Polyphonic ring tones, Java games, Bluetooth, FM radio, Google Maps and Walk Mate for pedometer tracking add to the appeal of this stylish handset.  Expect between 4.5 and 9 hours of talk time with 385 hours on standby.  As a pay-as-you-go phone, pricing should be in the range of £175 while it could be provided free of charge will some contracts.

The handset has a smooth sliding mechanism, increasing the height to 130mm, that can easily be used one-handed although this does tend to increase the risk of adding unwanted finger smears to the units TFT screen. http://www.discount-laptop-battery.co.uk/dell-gk479.htm While on the subject of the screen, this measures 2.2-inch diagonally and gives a bright clear display with a 240 x 320 pixel resolution.

The Sony Erisson W595 is a phone not a camera or other thing.