Adding to the iPod

Although developed as a personal listening device, the iPod can act as a community device with the aid of an appropriate add-on piece of kit. 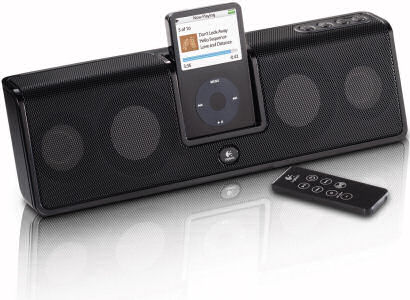 While the various flavours of the iPod continue to dominate the personal listening arena, the product is also to make inroads into home and group listening circles.  The impetus for this incursion is being driven by several third-party companies who have developed different add-ons to take advantage of the iPod phenomena.  One such offering is the mm50 from Logitech.

The mm50 (and I have no idea as to why Logitech has chosen this particular title) is a portable speaker set for the iPod.  While I have been unable to test this speaker set with all the various iPod devices, those that I have had access to, including the Shuffle although this will required an adapter that is not supplied, performed without any problems.

On opening the box I was a little surprised to notice that although the supplied power lead and plug was of the expected Apple white colour, the main speaker unit seemed to be black.  However, after taking the speaker unit out of the box, I discovered that my perceived first impression was wrong as the speaker unit was encased in a handy, black zipped carry case.  Once the case was removed, the speaker unit was indeed white as are most iPod accessories.

The carry case does not have a handle or strap but it is small and light enough, even with the various paraphernalia packed inside, to be carried easily in one hand.  The case is also firm enough and well padded to help ensure against accidental damage.  Along with the speaker unit, Logitech includes inserts to help mount the various incarnations of the iPod and a remote (yes it is white) that allows you to wirelessly control playback and volume levels.  These various extras will fit into the carry case.

Measuring 325 x 102 x 32mm, the mm50 features four speakers which are mounted on the front and are covered by a wire mesh.  Logitech has used a combination of Max-X high-excursion drivers with neodymium magnets plus 3" pressure drivers to provide the power behind this speaker system.  What also seems to help is the slightly unusual shape of the speaker unit.  Rather than stand upright, the mm50 adopts a semi-reclined position.  At first I though that the speakers would fall over at the slightest touch but once again I was wrong.  Hidden on the base of the unit is a pair of swing-out feet to ensure a firm stance.

Buttons are positioned along the top of the unit for power on/off; widening the soundfield for 3D stereo; and adjusting volume levels.  Sockets are located at the rear of the unit for connection mains power and headphones using a 3.5mm jack plug.  While there was no problem with the power socket, I did encountered difficulties when attaching my headphones.  After some experimentation, I discovered that I needed to only partially insert my headphone jack in order to get the desired result of sound from the headphones while cutting out sound from the speakers.

The mm50 not only adds external speaker capabilities to your iPod device but it also recharges it while you are listening to music.  As well as working from mains power, the mm50 has its own built-in rechargeable battery.  This should give up to seven hours of life from a single charge which takes up to five hours.

As mentioned earlier, the mm50 is purely an iPod accessory.  No connection socket is provided for other types of MP3 players.  However to counter this omission, there is the portability aspect of this device that includes seven hours of battery life and the useful carry case.  Logitech has priced this product at £99.99 but by shopping around you could source the mm50 for around 30% discount

The 3.5mm audio jack plug on the back is in fact a auxilary line in. so that it may be used with other input sources.
Thsi Product is excellent though, size vs sound quality is spot on. :)