Did you realise the iPod first appeared over ten years ago? What started as a music player to challenge other manufacturers MP3 offerings has now become a brand that has spread its wings and gone on to be far more than that? 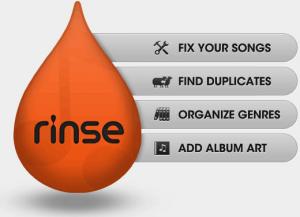 Here are twelve musical facts about those years. Do you know the year in which each of these happened? Check your answers with those at the end of the following review to see if you got them all.

While I have not had an iPod for more than half that time it has still got lots of duplicates, untitled tracks and as for missing artwork ….

So here Real Networks bring you Rinse that utilises the Gracenotes database to remove duplicates, give tracks correct titles and find that missing artwork.

A small download from www.rinsemymusic.com and you have trial version, if you like it and what it does you can purchase a code to turn it into the full product. The trial version will only work on a maximum of 50 tunes.

My iTunes database is small compared to many people but it still runs to over 800 tracks and according to iTunes it will take just over two days to play it takes 7.8GB of space. I knew I had a few duplicate tracks in it.

However Rinse found I had 39, of course some were different versions of the same tune, you can setup exactly what to do, one option is to keep the latest, another is to keep the longest, a third is keep the highest bit rate. I would suggest you try it with a small sample and see what works best for you, you can even keep the duplicates in a different folder so when you find that was not what you wanted to do you still can rectify it.

A lot of my tracks are hand entered and certain things like year and sometimes even the album title are not entered, Rinse can deal with that. For most however the album artwork is missing for one of many reasons and Rinse found several lots of artwork that iTunes did not or could not for whatever reason.

My 804 tracks which had a lot of unidentified or orphaned tracks now is 765 and I have a number of new album art covers as well as far more information. The whole process once I had the code took less than 108 minutes.

There are four main headings and you set the range or parameters including the % level of matching, the default is 80% but it's up to you what level you set it at, if your database is large then why not leave it working overnight.

More details about Rinse are available from www.rinsemymusic.com where you can also download the trial.