So many peoples music collection now resides on large capacity iPods that for many a decent speaker system for their iPod replaces the traditional audio stack system to play both CDs and Records as well as the old radio. 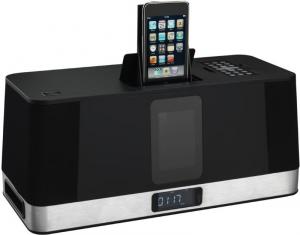 This is the first such unit that I have used that your iPod can be either inside or outside the casing of the actual unit.

The Intempo Perform measures 35x14x16cm (when the iPod is inside). The rear has sockets for an auxilery input as well as the DC input and the hard wired wire aerial. The top left side has the on/off switch. The right of the top has almost all the controls in an indent and this indent is also a storage space for the 21 button remote control, a novel idea.

So having decided that this is not just ‘another iPod holder’ how good is the sound, well it is rather good actually. Would I cash in my audio system, no, but only because the majority of the music collection is on CD and vinyl.

Anyone who has their collection on an iPod then this of course takes up almost no space given the shelves and racks that my music takes. Here of course you can set playlists to last an hour, an evening or a day or so should you wish.

Of course your iPod charges while docked either inside or outside the unit. In fact if you think of it as a classy clock radio then you might get closest to a decent description. Yes it has a sleep timer and an alarm as well.

The one drawback is that as soon as the power is disconnected then the time is lost so be sure to place it where you wish it to be used before the initial time set.

Using it as an alarm you can wake up to a buzzer, your iPod or the inbuilt radio in the unit. The pair of inbuilt speakers each gives 15watts and while you are not going to fill the Albert Hall with the output the average room is easy.

There is a twelve page manual that explains everything including how to save FM radio presets so you don’t need to tune each time.

I have one minor quibble with the manual which says the ‘EQ’ equalizer will give you Pop, Rock, Jazz, Classic or Flat. My unit offers Studio, Arena, Monitor, Club or Flat. The Flat referred to has no effect and is not the dwelling.

For those who always want more bass there is a Mega Bass setting. If you do not have an iPod and instead use a MP3 player then you can use the ‘Aux’ setting and get most of the benefits but not of course the auto charge.

A lot of the controls can be done from the tray on top of the unit, however the 21 key remote has to be used for certain things like setting the ‘EQ’ for one. If used in bed then the snooze button on the top of the unit will need to be in reach as that is not on the remote.

Is the motorised tray a gimmick, maybe. Does it give that little extra security, definitely. Is it a talking point, absolutely.

Doing my Internet searches found the Intempo Perform at a best price of £129.99 including free delivery from the first link below.