A small, lightweight, portable iPod docking station aimed at those that want a robust home dock that's also capable of battery powered use on the move. 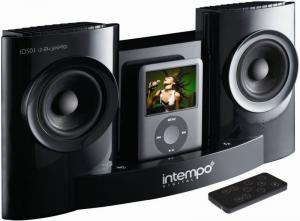 The Intempo IDS-01 is available in black, silver and pink - I have the silver version here to test. The unit measures 240 x 120 x 90mm (WxHxD) and weighs a light 600g. Taking a traditional layout, the iDS-01 positions the iPod dock between the pair of stereo speakers. It's compatible with all the standard docking iPods, only excluding the Shuffle.

The speakers have a combined power output of 12W which delivers reasonable quality sound although the bass is somewhat limited - this is only to be expected with a unit this size. With the unit on a solid surface I could turn the volume right up without any rattle, although at high volume the bass is more noticeably lacking.

The iDS-01 comes complete with power supply and 3.5mm - 3.5mm jack cable allowing you to connect other audio sources into the iDS01, for example your mobile phone. There's also an attractive remote control that behaves in a much more logical way than many similar devices I've used, mainly due to simply having a clear layout for the buttons.

For those on the move the 'unplugged' refers to the ability of this product to be run from battery. A compartment on the rear of the device takes 4xAA batteries that should give 20 hours of play time. Unfortunately I was surprised to discover that the compartment is actually too cramped to accept any of the rechargeable AA batteries that I have available (multiple brands) - and even with standard alkaline cells the fit is very tight. This is coupled with a cover for the battery compartment that I found difficult to remove, being forced to use a sharp object to ease it open. My personal dislike for disposable batteries mean this gets quite a big black mark for the iDS-01. Also be aware that when operated from battery the iDS-01 will not charge your iPod so make sure you give that a good charge before you go out the door.

One other concern on portability is the arrangement of the speakers. Which the visible cones can add to the look of the product (depending on you taste), it does leave the speakers terribly exposed and prone to damage. I'd definitely take a good deal of care packing these speakers in order to avoid damage. These concerns are likely due to the heritage of the iDS-01 - this is a revamped version of a non-portable product with the main change being the addition of a battery compartment.

Testing with a third generation iPod Nano worked with no problems at all. I did however have an issue with noise using an iPod Touch when mains powered. As long as the iPod was correctly seated in the mains powered iDS-01, I had a constant low-level background beat, even with no music playing. According to the manual, background 'crackle' is associated with an incorrectly positioned iPod. I could make the noise go away, but only by moving the iPod such that it was not being charged, which involved it being tilted at an angle. When playing music this won't be terribly noticeable unless you're playing particularly quiet music. I've not experienced anything similar to this on any other speaker systems using the same iPod.

Contrary to several advertisements for the iDS-01, and indeed information on the UK Intempo site the iDS-01 does not provide a USB connector to allow syncronisation with your computer.

In summary, the Intempo iDS-01 is a reasonable light-weight iPod speaker system, ideal maybe for a teanagers bedroom and for ocassional use on the move. The problem with the battery compartment dimensions is an unfortunate over-sight meaning that you have to be happy with disposable batteries for this product to be of use to you on the move.

The 'unplugged' version of the iDS-01 is quite new and I've not found it available from many sources. I have found it at Comet for £39.14. That price puts this unit up against some stiff competition, for example the Gear4 HouseParty I recently reviewed is now only £45, which looks a lot more professional, has a build in FM radio and has much superior sound.

i have one of these, works really well with a 2nd gen nano and my blackberry curve 8900

works really well and if you take the soft pad off the inside of the battery cover you can get rechargable batteries in,