If it's classic styling you're looking for - a DAB radio that'll looks as good as it sounds and that can comfortably take pride of place in your home then Roberts may have something for you. 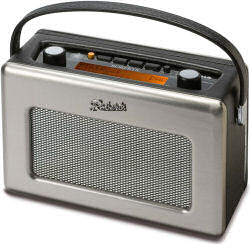 The 'Revival' range has been around for a little while from Roberts in various finishes. This limited edition version takes style to a new level. When you take it out of the packaging the first thing you notice is the weight - at around 1.5Kg (3lb) without batteries this is probably the heaviest DAB radio I've seen. Where's all that weight? Well a lot of it is in the brushed stainless-steel front and rear panels. These are very solid and just feel great. The front panel has a centre speaker grill while the rear has aerial, power and line-in connectors.

Power is provided through an external mains power brick, which is a bit of a pity in a product of this size. I'd much prefer an internal power supply, which given the size of the box should have been achievable.

Sandwiched between the two panels is a leather bound control block containing the controls. All controls are on the top of the unit. The the left is the rotary volume control, to the right the tuning control. In between is a clear LCD display and a very minimal number of buttons.

This is a mono unit - the single speaker being mounted behind the central grill. Despite only having 1W output the sound is crisp and clear. The weight helps to prevent vibration with the volume turned up resulting in a very pleasant sound quality.

So - it looks great, sounds good, but how good is it as a radio? Feature-wise, this isn't the product for you if you want every latest bell and whistle. The radio itself is a fairly standard/basic DAB/FM receiver. FM stations benefit from RDS identification. Reception is via a good sized telescopic aerial mounted on the rear of the device. This is good, but in areas of weak reception limit positioning of the aerial in some situations. Unlike a few other products the RD-50 had no problems locating and tuning into either FM or DAB stations.

Robert's 'PausePlus' feature has been integrated into the RD-50, in this case provided with more memory than in the Gemini RD55, providing around two to three times the storage capacity - up to 40 minutes, although 20 is more reasonable (depends on quality of the station you're listening to!)

PausePlus is a great feature and is the radio equivalent of pausing live TV - a concept made popular by Sky+ boxes. In radio terms this means that at the push of a button, the radio stops playing and is instead recorded to internal memory. When you're ready to listen again - release PausePlus and carry on from where you left off.

One nice feature of PausePlus is that it records as soon as you tune into a DAB station. This is great if you're in the middle of listening to an interesting article, or a track you haven't heard before and you're interrupted at that vital moment (in my case often by a daughter that has a knack for knowing exactly the right moment, or a pan boiling over!). PausePlus comes to the rescue - the radio has been silently recording in the background - now just rewind and listen again. Also useful if, like me, you hear a great track but missed the introduction and would like to know the artist.

The Revival has a 'favourite station' button that you can use to remember, well, your favourite station. This is a slightly week point on this product - it basically means you have just one preset. For those that have a few favourite stations this is a bit of a limitation. Of course in the case of DAB this is much less of an issue that for analogue radio where finding a station meant remember it's frequency. With DAB you simply scroll through an analogue list of all available channels.

In summary this is a very good quality DAB radio that is as much a style icon as it is a piece of audio equipment. It doesn't have all of the bells or whistles of many products available, but all the basics are there along with an almost invaluable PausePlus feature (try living without it once you've used it for a few weeks!).

The limited edition stainless steel version we're reviewing here is not cheap at £200, but you may well think that something not made of plastic, and of high quality is worth that price. That's the basis on which I've decided to award the value for money smileys - is it worth paying a premium for a quality product (and here I'm looking at form over functionality)? If it is a little expensive for you then exactly the same functionality is available in standard Revival RD50 in a range of leather-cloth bound wooden cabinets.

The Roberts web-site has some information on the Revival RD50 range here, although there isn't anything on the stainless steel limited edition.

John Lewis and Amazon are both shipping the stainless steel variant, although John Lewis for £199.99 and Amazon for considerably less. - the standard editions for around £117.49, in a variety of colours.

The full Revival RD50 range, starting at £119.49 is available from Amazon

good invention I will tell others how good it is
also the website has lots of ideas for all
Rating: