The quick and easy camcorder market is certainly hotting up as Flip Video introduces a new model to the Flip family. 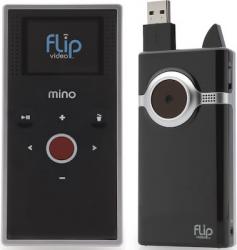 Although it was not all that long ago that the Flip Ultra was launched in the UK, Flip Video has followed up that initial offering with the new Flip Mino.  Again targeted primarily as the “fun loving” user who wants the ability to capture video content quickly and then transferred it to a computer or viewed on a television set, the Flip Mino is a camcorder that puts simplicity near the top of its feature set.

While some of the Mino’s functionality and specification remain the same as the Flip Ultra, there are some differences to which I will return to later.  The Flip Mino allows you to capture up to 60 minutes of video at 30fps, stored in the supplied 2GB of memory, by the simple method of point and shoot with the click of a button being all that is needed to start and stop the operation.  A live preview is available during recording, as is the ability to zoom in and out of the current scene.  On-screen feedback is provided as to the record time available/length of the current recording, battery level and zoom level.

The content can then be transferred to your computer using software supplied for Windows and the Mac.  In the case of Windows this software provides the ability to carry out basis file management tasks, trim the start or end of a clip, and merge together various clips into a movie using a small selection of theme templates.  These movies will be in MPEG-4 format.  The process of turning the clips into a movie is not the quickest although the results are generally worth the wait.  Movies and clips can be played back using the supplied software or your favourite media player.  While hardly of high definition quality, the content captured by the Mino is more than acceptable for most circumstances.

As mentioned earlier, there are a number of differences between the Mino and the original Ultra model.  The Mino is smaller with dimensions of 100 x 50 x 15mm as against 105 x 60 x 20mm while the mock rubber casing has been replaced by a reflection substance.  Although the display screen looks slightly smaller on the Mino, this is an optical illusion as it remains a 1.5-inch transflective display.

A dramatic change has been made to the type and layout of the Mino’s controls.  They provide the same functions but rather than a navigation pad build around a raised record button, the Mino has touch sensitive controls with recessed record, start/stop play and delete buttons.  When in use these controls, apart from the record button, light up and are extremely sensitive with even the slightest touch causing a reaction – it did take me a while to become adjusted to this feature.

Unlike the Ultra, which located the Flip USB stick on the side of the device, the Mino places it, more conveniently for inserting it into a port, at the top of the unit.  The release button for the USB stick stays on the left side along with the TV connection socket while the on/off switch is on the right side.  Power is provided by a built-in rechargeable battery which requires an initial three hour charge when attached to a computer or two hours when using the optional Video Quick Charger.

Whereas you had a choice of four colours with the Ultra, the Mino is only available in black or silver.  Price wise there has been a 20% increase with the Mino being priced at £119.95.  This does seem a little excessive especially as there is no memory card facility to increase storage capacity.   However this is an attractive purchase for the fun-loving crowd.