A very large and powerful Tower system designed not for gamers – although it’s very fast – but for those Creative People who are not the norm but those who need the power to create their work, this will certainly suit those in that category. 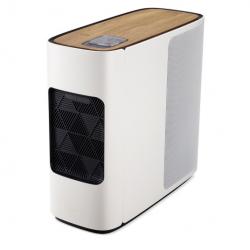 First the dimensions it is 43cm tall, 47cm deep and 20cm wide. It is also quite heavy at around 9kilos.

This is the top of the range ConceptD, specifications further down but to let you know now its £2999 link at the end. However you do get a three year warranty.

While there is no optical drive it does have an SD card reader.

Graphics are handled by an NVIDIA Quadro P4000 card with 8GB of memory.

Wi-Fi and Ethernet are included.

The rear has 4 expansion slots and the motherboard has a PCI slot, a PCI Express slot and two PCI express 16 slots.

There are 10 USB ports and it has a 500watt power supply.

Now to tell you where everything is, the front has a headset holder for those preferring to have sound kept to themselves.

The front of the flat top has an inset that has an always on USB port and another USB port beside them two audio ports then side by side a USB port and a USB ‘C’ port, there is also an SD card socket and from back to front of the inset a line of LED’s with the on/off button front most. This top is also a wireless charge point.

At the top of the rear the power supply heat extraction and inset for the kettle style mains lead input.

Below this also inset are two Display Port, a HDMI and a D-Sub connection all these are blanked off as the connections are switched off due to the NVIDIA card. Next are two USB3 ports and a dual keyboard/mouse PS/2 type connection.

Carrying on down two further USB ports below this two USB always on ports as well as an Ethernet port also always on. Finally three 3.5mm audio ports complete the insets.

Below this the four bays the top one is taken by the NVIDIA card, this has USB ‘C’ connection and beside it three display port connectors. In the box are an instruction manual for the NVIDIA card and three 18cm long Display Port adapters to, HDMI, Digital and USB ‘C’.

The only other thing supplied is a kettle style mains lead.

So you will need a keyboard, a mouse and a monitor/flat panel.

As stated this is extremely fast and as I only had the unit for just over a week I barely scratched what it can do, but whatever you need a fast PC for it will do it. One quick example of speed, the last thing I do before packing up the PC for return is to fully reset it, this task can take up to three hours, with this unit was under an hour.

As stated it is available from ACER direct for £2999. There are three other models with less memory etc. see the Acer link.