A comfortable headset, a wireless headset, a headset that connects to any 3.5mm jack plug and thus not only is your MP3 player able to be connected without wires but anything else that has a 3.5mm jack.

My first personal joy was that you can remove the headset from the plastic container without an industrial pair of scissors and therefore the packaging, instruction book and charger can be replaced and kept together.

So what do you get in the box? A small 3.5x3.5x1.3cm black box with a 3.5mm jack plug on the end that can fit into your MP3 or audio player. You also get six small plastic plates to provide a custom fit for a range of iPods. A 13amp plug with a 1.1metre lead to two charging sockets one for the headset and the other for the black box with jack. There is also a short (20cm) extension lead to extend from your 3.5mm socket if plugging it in directly is impractical. Finally a getting started booklet with the first eight pages in English.

When the 13amp plug is plugged in and power is on a green LED shows, the end of the leads into the headset and black box glow orange when charging. The stated life between charges is six hours. I found the first charge took around two hours (slightly less for the headset). To link the headset and the Black Box press a button on the side of the headset until it shines red. Do the same on the Black Box and in my tests as soon as the two are glowing red they change to blue and are linked.

I used this not only with an MP3 player but also with my stereo system the latter being great for large families who may not always share the same musical taste and of course no trailing wires for anyone to trip over. You can increase or decrease the volume by pressing either the '+' or '-' buttons on the side of the headset. This last task will probably initially have to be done with the headset off or you will not know exactly where to push. 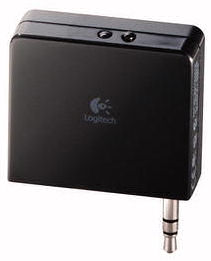 In use the headset was very light and comfortable. While I did use it out and about with a number of different MP3 players I feel that the size of the headset (although not large) is more to squirrel away in a bag or purse than a set of earbuds.

As stated I think in the house is the use I would mainly put it to. While six hours is a reasonable time for use indoors it may not be enough out and about. Often when I am out for a day the total time would be closer to 10 or 12 hours. While it would not normally be switched on for all that time having to switch on first the headset and then the Black Box is an added task.

Leaving it plugged into an audio system for an evening allows others to do there thing in the same room without being disturbed by your choice of music.

This is a Bluetooth 2.0 device and while 33feet (10metres) is the stated distance I never quite got that far away inside the house. I managed to go down the garden and this could be idea as the weather gets better to listen to a play or news program. Perhaps  again your favourite music either from a record or CD as well as the MP3 player. Remember all you need on your audio system is a 3.5mm jack socket.

The total weight of the headset is less than 50grams and nothing goes into the ear. There are little round plastic tubes that hook over the top of the ear and the earphones themselves are round the back of the neck with only a light touch on the face of the ear from the earpieces.

Doing my Internet searches found the Logitech FreePulse Wireless for a best price of £51.21 including delivery from the first link below.