When does a phone become a computer? Perhaps not quite yet but as this Samsung phone can do a lot of things that a computer can its getting there. The screen flips easily between landscape and portrait for ease of viewing. 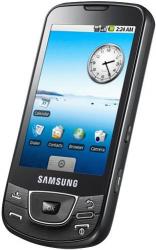 It is 11x5.5x1.5cm and weights 125grams. Heavier than a lot of other units but most is the larger battery to give more time between charges.

The viewable screen is 4.5x6.8cm. There are lots of apps that can be purchased for all the modern phones, here apart from the built in bits you get seven icons on the desktop apart from a rather nice analogue clock as well as the digital one on the top bar. This bar also shows what sort of phone and Internet reception and the state of the battery.

Just below the icons is the easiest way to start burrowing into the menus. My first port of call was the screen timeout set by default at the shortest time of 15seconds and when you are trying to learn about a new phone that’s too short. Luckily it is easy to find with sensible headings and to change and 1, 2 or 10 minutes will suit most people.

When the screen is locked – useful when in a pocket or bag – a digital clock and date are still visible on the display.

The screen is touch controlled and a single touch will get you straight into any app or the menu that is displayed. There are six buttons under the screen and a lozenge shaped five position joystick in the centre of the buttons.

The menu itself has 26 icons and these can lead to other menus but as the headings are sensible it should not confuse. If you get lost the right top button under the screen is the back button so you should always get back to the top.

There is a small (size wise) 90 page user manual that should be able to offer sound basic advice should you need it.

This phone is on Virgin and during the short review period I managed to browse the Internet send voice messages and picture messages as well as emails with the minimum of fuss. Yes it CAN ALSO MAKE STANDARD PHONE CALLS. These days with the complexity of offerings simple phone calls are often forgotten.

It has a reasonable camera built in top left of the back as well or course with video – where would YouTube be without mobile phone videos – and not only can you take video, but should you wish connect to YouTube etc to download and play them on your phone. However to take pictures or video you need a micro SD card that inserts in the side of the unit, you need to remove the back to insert it but this is added security as it also needs the back removed to take it out again.

One nice feature is the GPS by Google that you can use to navigate to any place, there is even a special mode for pedestrians and the place need not be a town or street it could be a railway station, restaurant or even a cash machine.

I know people who go out armed with only the post code of where they are going but to me – belt, braces and safety pin person that I am – that’s not enough as the post code is not always accurate and it could have been mistyped in the first place.

Android does seem to be the way to go and maybe in the not to distant future it will be possible to everything on the mobile phone. For those like me who turn their phone off 30 seconds start up & 7 seconds shut down.

Available from a range of outlets on contract or pay as you go. The first link has it free for £20 a month.

HI - Pulling my hair out.

Background Data ON  : Auto-Sync ON

Sync is currently experiencing problems. It will be back shortly.

Contacts, e-mails not being Synced from my g-mail account???

i recently purchased the GT15700, This pone is nice to look at but full of shit.
when i serve all applications like contacts,  internet  and other basic settings, when it goes off all settings will be lost.
It has no back up memory. What a useless phone to have.
what a waste of money because you don't get the value for your money
kenny
Rating:

Undoubtedly the worst phone I've ever used.  It's never worked well.  It won't recognise my computer so I can't back it up or print/transfer any pictures i take and I can't enable my google account to use some of the features.  Contacts come and go from my list and the android market doesn't always work so I can't download apps any more.  All in all not a successful purchase!
Rating:

had nothing but problems with this phone iv had buttons stop workin apps never work wont even let me get on my contacts half of time keeps sayin app not respondin forclose i would not reccomend it to any1 now it wont even charge up
Rating:

nice phone...u ppl try to understand it 1st then it will be much easy to handle such problems
Rating:

my GT15700 is about 1month fron purchasing it.but in very dappointed cause until now i cant send or recieve pictures via mms..wats goin on?f i open an application suddenllt returns to my homescreen..i was already reformating my phone cause my sd cards was damaged for no reason..i only play my musics suddenly stop...pls send me solutiona on this especially in multimedia services..hope you will not take long so i can fix my problem...flash player also cannot be downloded.
Rating:

just got one ystday hope some of d coments aint right
Rating:

how can i reset my GT 15700? i can't activate my google account. plsss help me ty!
Rating:

i 've samsung gt-15700 but the bluetooth does not work.
please help me to recover this problem.
thanks
Rating:

this phone is awesome, i love it.. 5 stars from me..
Rating:

I got this phone for a perfect deal and it's just an amazing way to testrun android. I must warn that it does not seem to be a highend android as some high android applications won't work but it is just a perfect way to start experiencing android before buying the likes of the new Samsung Galaxy S.
Rating:

Well. another disatisfied customer. I alsom have a Samsung GT-1700.
My problem is I have a Ericsson HCB 300 Bluetooth hand free fitted in my car. It is pairs with the phone but does not connect. 2nd unable to play movie pics. Waste, of money and time.
Rating:

i dont like the samsung anymore...my problem is also like to angelo and reena this phone is cheating the person who buy this. WATTA FUCK this phonE..
Rating:

having problem to set up my email account
Rating:

hello please i cant play movies with my phone, samsung gt15700. is there any application that can support that?
Rating:

Hi, basically ive got the samsung GT 15700 and i clicked on the forgot code by accident now i am unable to use the phone as when i type in my email address it wont accept it so what should i do?I've tried typing in my email address and password several times, switching the phone on and off but nothing seems to work.
Rating:

I HAVE SO MANY PICTURE'S I LOOKING AT THE MENO THERE IS NO SEND PICTURE VIA BLUETOOTH..   WHEN SOMEBODY SEND ME A PICTURE OR SOUND VIA BLUETOOTH, WHEN I ACCEPT. SOMETHINGS WRONG FOLLOW INSTRUCTIONS AT THE MAUAL, IT'S NOTHING I TRY OVER & OVER, OVER , OVER... UNTIL NOW. PLS SEND ME AN ADVICE
Rating:

how can sent a picture via bluetooth, if somebody sent me any? in bluetooth when you accept it's canceld, i don't know why.

If i want to write a imfortant mater's there is no note pad. what kind of samsung gt 15700.   did you try to send any picture via bluetooth? i try this so many 100 times nothing. NOTHING
Rating: