Two ways to connect to Skype

Neither of which is via a PC however both require an Ethernet connection, the first the Belkin Ethernet Skype Phone is wired and the second the Philips VOIP 841 has a wireless link to its base station that connects to the router. 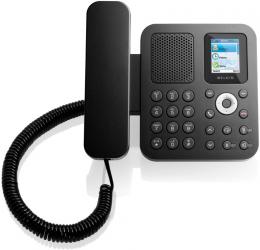 This looks exactly like a standard office phone. Looks are deceiving as it is a Skype phone and unlike most other Skype phones needs just one thing an Ethernet port. It is not wireless but wired and probably because of that sound to the caller and receiver is excellent.

It is 15cm tall, 18cm wide and 3cm thick. However the phone sits at 45degrees making its display very clear on your desk. The handset is 17x4.5x3cm max and this sits on the left side of the unit. Also unlike a lot of Skype and indeed most mobile phones the display is always visible as it is on the body of the unit.

Once you have plugged in the Ethernet lead (supplied) to your phone and a port on your router you only need to plug the power adapter into the phone. Once it has power it will ask you to login (or create an account) and once your user name and password are entered it can remember them so – if like me – you do not keep it permanently turned on next login is rather quicker.

On most occasions the router is also off at night so as the phone and router are both connected to the same surge strip I need to retry the login as the phone is up and ready before the router is, the display is clear, bright and easy to read and another advantage you can see messages something that is more than difficult when the display is on the underside of the phone. Just like a normal wired phone lift the receiver to answer.

In use this was a dream, the best reception I have had, the best sound quality, no drop outs and no problems with echo back from the other end whatever the other user is using. Skype out also worked without problem.

So if you are happy to be tied to a phone cord then I heartily recommend this offering from Belkin. Doing my Internet searches found the Belkin Ethernet Skype Phone at a best price of £69.51 from first link below. 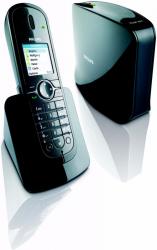 This is a phone (like many mobile offerings) and a base station. The advantage is that you can move around while making or receiving a call.

The phone is 15x4.5x2.5cm and weights 120grams with its two rechargeable ‘AAA’ inserted. When not in use this sits in a small 6.5cm triangle it has a power lead going from it to the base station, all the time base station is powered the batteries are being charged. The base station is 13x11x4cm. The rear has three inputs first the power adapter, second the Ethernet and third a standard BT lead. The top has a paging button (useful for locating the phone from under a chair cushion etc) a Skype LED and a Line LED.

Not only is this a Skype phone but also a standard one capable of making and receiving normal calls.

When you first attach the leads you are prompted to enter your Skype username and password, it asks you if you want it to remember these, despite saying yes all the time it will only remember my name and not my Skype password.

When making non Skype calls it asks should the call be connected using the normal phone network or Skype out. This enables you to choose which is the best (cost effective means) of making the call.

Call quality on the BT line was fine, using Skype it was ok but of course with the phone at your ear you know nothing about the reason for the ringing tone stopping – call rejected or being forwarded as examples – however this can be avoided by using the speakerphone option but people I used this with were aware of a different sound quality. Best price £104.90 from the first link below.