Following the trend of merging different technologies into a single device, Kingston Technology adds a new offering to its product portfolio. 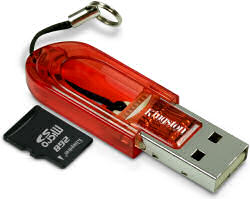 Over the last few months we have covered a number of memory card offerings and USB flash devices.  Now it is the turn of a product that combines a memory card with a USB stick device that takes over the functionality normally provided by a card reader.  As the world's largest independent manufacturer of memory products, it is not too surprising to know that this new approach to memory cards and USB connectivity should come from Kingston Technology.  The product in question is the USB microSD reader and 2GB card bundle.  According to Jim Selby, Kingston's Product Marketing Manager EMEA, with this product "Consumers now have a handy option of backing up contact info when changing phones, moving digital music and video between PC and phones more easily."

This kit is made up of a microSD 2GB card and the reader device which measures 32.89 x 15.3 x 7.66mm and weighs just 4.g.  While the microSD card is of the standard design, the reader unit does take a little getting used to especially in the initial stages.  The reader consists of two components held together by a drawstring contraption.  One of the components is a red plastic shell whose sole purpose is to provide a degree of protection when the device is in transit.  The shell holds a small USB connector which needs to be extracted from the shell unit.

The USB connector has a couple of ridges along the top that allow you to slide in the microSD card.  Inserting the card is fairly straightforward although you do need to make sure that is goes in all the way to achieve a good connection.  Due to the small size of the memory card, this is a micro card after all, I was expecting problems when it came to removing the card but was pleasantly surprised by how easy this task turned out to be.

With the card inserted you might thing that the next stage is, as I did, to replace the connector into the shell casing, aided by the drawstring, before plugging the device into a USB port.  However this is not the case as you quickly discover that the unit will not fit into a port.  The USB device needs to be kept separate from the red outer casing although it is still attached by the drawstring.  Once the device is inserted, it will be recognised by the computer operating system and allocated a drive letter.  The card can then be read and have data copied to and from it using standard Windows protocols.

As you may have noticed from the previously mentioned list of components supplied with this kit, no adapter is supplied for fitting the microSD card into a standard size slot.  I can only presume that

feels that users of microSD cards will already possess an adapter from a previous purchase of this type of media.

Read and write speeds with this device will depend upon factors such as file size and the host computer.  I was able to achieve a read speed of approximately 9MB/sec while write speed was 4.5MB/sec.  The speed tests were conducted using a variety of files, USB 2.0 connection and a Pentium 4 2.6GHz system running Windows XP.  Pricing for the 2GB product has been set at £15.75 while a 1GB version is available at £8.20, although I note that one of Amazon's partners appear to be selling this for only £3.79 for 2G.

Hi, Just to let people know. Transcend have also released their version of this product with a handy little card reader. The following site have them on sale for £14.60 :