Boiling a cup of water is quicker than boiling a full kettle so saving on time and energy consumption. That's the idea behind the Tefal Quick Cup. 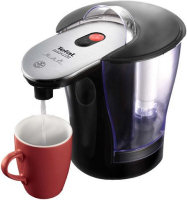 Saving energy is important for both conservation issues and, especially with the ever-increasing spiral of rising costs, financial concerns.  Arriving with accreditation from the Energy Saving Trust, the Tefal Quick Cup product offers to help by delivering a significant reduction in energy consumption when compared against that of the average kettle.

As you might suppose from its title, the Quick Cup aims to deliver a cup of hot water within a short period - actually it claimed that it would take just three seconds.  If you prefer you could opt for cool (that is room temperature and not cold) water.  In both cases the water would be filtered using the built-in Claris Aqua water filter system.

Setting up this device is straightforward with clear illustrated instructions provided in the small ten-page User Guide.  You will need to insert the supplied Claris filter cartridge into the detachable Perspex water tank and then fill the tank with cold water to a capacity of 1.5 litres.  The next stage is to slot the tank on to the main body of the appliance which connects to a power source via a short permanently attached lead.  Once you have replaced the lid to the tank, you are ready to go.

The Quick Cup delivers its water from a downward pointed nozzle found on the front of the device.  Two buttons on top of the unit allow you to select whether you require hot or cool water.  While the hot button is coloured red and is easily identifiable, the cool button is coloured black and is almost indistinguishable from the black top of the unit.  I found that I needed to hold down the chosen button until the required amount of water was delivered.  As the water arrived in not much more than a trickle (whether hot or cool), this process makes a mockery of the three second claim.  In my tests it took 30 seconds to deliver a cupful of water.  While not reducing the time required, I was able to avoid holding down the button by taking advantage of the programming ability of this device.  This process involves training the Quick Cup by completing a test run.  Once programmed the Quick Cup delivers the specific amount of water required by the user.

It was noticeable that if you attempted to fill a cup with the cool water option within a short period of drawing off a cup of hot water then the first few drops of water would be hot (even emitting some steam).  As a result rather than cool water you could end up with tepid water.

The Tefal Quick Cup works fine, but not at the speed claimed, for delivering hot water but was less successful when asked for cool water in certain circumstances.  This device would suit a single person working from home or somebody on a busy schedule.  The Tefal Quick Cup has been priced at £59.99 by Tefal and is available for £49.99, including shipping, from Amazon on the following link :

Information from the Tefal site is available on the following link :

Using a water filter is optional in the Quick Cup. Personally I don't like the taste of filtered water so I took the filter out of mine. I'm more of a coffee drinker so the Quick Cup works fine for me. I've tried it with Green tea and that tasted just like normal.

In response to the review on this page I should note that the instructions do state that if you want room temperature water after having obtained hot water you should wait about ten minutes, or run it for a second or two to get rid of any remaining hot water.
Rating:

I have just bought a tefal quick cup kettle. While I can accept the problems others are mentioning, like filter cost, I have noticed two personal advantages which might be of use to others. I have trouble lifting a heavy kettle as I have painful wrists and arms. You do not have to lift the kettle at all, just press a button to get the water. Mine dispenses the water very quickly at present and I like the ambient water for squash etc. You do not even need to lift the kettle to fill it as I have been using a measuring jug. My other personal benefit is that I am supposed to record how much water I drink a day as I am on diuretics. I like to aim at about 1 litre and the new kettle means that I can easily work out how much water I have used today.
Rating:

Incidently the first review says "boiling a cup of water" Every review I have read and Tefal themselves agree that it does not boil, so no good for making tea. And Ive read that the amount that the filter works for is such that if you use it regularly it will not even last 6 weeks, just think of all the filters offsetting the green credentials
Rating:

The blurb on this item says that it can save £31 per year.  But then you find that a filter (really wter that you heat should not need one) last for 6 weeks and costs £5, thus creating an extra £43 per year.  Wonder if the 6 weeks applies if you are using it a lot and also wonder about the eco factor when that is over 8 filters to produce. Othere reviewers have said they have returned several as the water would not flow, perhaps they are referring to the slow trickle mentioned above. And further, if you filter water you then want it cold , from this review it looks like you dont get it.